The first known 1976 Bicentennial design Eisenhower dollar "waffle coin" has been reported by Brian Hendelson, President of Waffle Coin Co. of Bridgewater, New Jersey.  It was discovered during the continuing examination of Mint-canceled coins obtained by Classic Coin in 2003, each with the distinctive corrugated, waffle-like pattern left by the Mint’s cancellation process,

"It is a Variety Two, dual-dated 1776-1976 Philadelphia Mint Ike dollar, and the first Bicentennial Ike discovered as a Mint-cancelled coin.  I got pretty excited when I realized what I was holding," said Hendelson.  "It’s the only one I’ve ever found."

"The mint takes in coins for exchange that are also waffle canceled. This is, thus far, the only Bicentennial dollar we are aware of that has gone through this cancellation process," said Dave Camire, NGC mint error consultant and President of Numismatic Conservation Services. 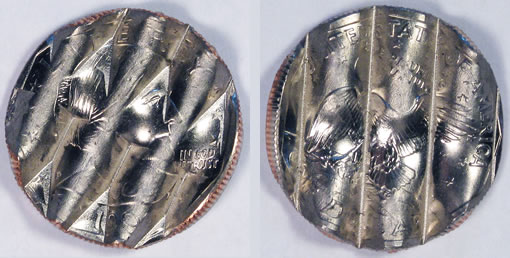 The Mint uses coin-canceling machines manufactured in The Netherlands to cancel rejected coins and blanks (planchets) prior to sending them to be melted.  Rollers on the machine crush and crumple the coins giving them surfaces that resemble a breakfast waffle. Waffle coins are not Mint errors; however, they are Mint products, rejected and canceled at the Mint because of some type of production problem with the specific coin.

"Because they’re a product of the United States Mint, the waffle coins have become a popular collectible.  Some people are trying to assemble waffle type sets of the available State Quarters," said Hendelson.

For additional information, contact Waffle Coin Co., at (908)725-4377 or online at www.CertifiedEnterprises.com.

I bought a waffle 1999 Susan b Anthony dollar a few years back, please send me some news there is anything about the waffle coin.