2008 First Spouse gold coins and bronze medals honoring Louisa Adams may be purchased from the United States Mint Thursday, May 28. The Louisa Adams gold coins are the second for 2008 and sixth in the First Spouse Gold Coin Series – a series that started off blazing hot, but have drastically cooled due to prices and demand. 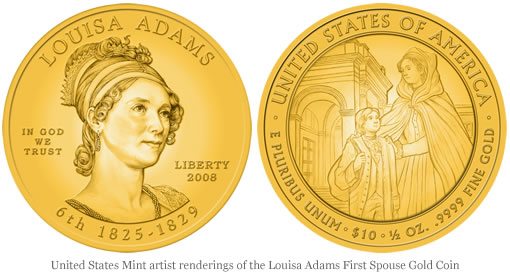 Martha Washington, Abigail Adams and Jefferson’s Liberty First Spouse gold coins flew of the Mint shelves and sold at records speeds — within hours of their availability.

The fourth and fifth coins — Dolley Madison and Elizabeth Monroe — sputtered. Their demand in the secondary market cooled and the high price of gold made buying them a larger obstacle.

And therein lies part of the problem. Flashback to the time spouse coins were first released and prices were $429.95 (proof) and $410.95 (uncirculated). Enter the rise in bullion prices. First Spouse Gold coin prices follow. Yet, their premiums over gold are significant.

They are beautiful coins for sure. But at a half ounce of 24-karat gold each, and London gold closing yesterday at $906.75 an ounce when the Mint announced Abigail coin pricing, their premiums are $333.15 for the proofs and $293.15 for the uncirculated.

Sorry, that’s hard to swallow on principle alone. In buying at these prices, a collector must hope gold will eventually rise much further or that spousal coins won’t meet their mintage limits and become even rarer. And then of course that doesn’t account for the total costs if anyone wanted to collect the entire first spouse coin series.

In this collector’s opinion, the Mint needs a wake up call. They should lower their premiums. The best way to honor first spouses may be a medal purchase.

The Louisa Adams First Spouse coin and medal design, as taken from the Mint release announcing the coins:

The image depicts Louisa Adams with her young son Charles as they embark on an arduous journey across Europe to join her husband in Paris.

An interesting account of the life of Louisa Adams may be found on the White House page, Louisa Catherine Johnson Adams.

Proof and uncirculated Louisa Adams First Spouse Gold Coins are available. The proof coin is priced at $619.95 while the uncirculated is $599.95. Both are 24-karat gold and have a total mintage limit set at 40,000 across both products.

A bronze medal version is also available for $3.50.

As already noted, the Dolley Madison First Spouse gold coins have not yet sold out and are priced lower than the Louisa Adams coins (bullion prices were lower at the time Madison coins were minted). They are priced at:

Each is $90 less than the Louisa Adams gold coins.

All available First Spouse gold coins may be purchased on the U.S. Mint product page:

The medal may be purchased from:

Although not yet announced, if the Mint follows tradition from 2007, a four medal set containing all four First Spouse medals for 2008 will be made available later in the year. An uncirculated Adams Presidential $1 coin packaged with a Louisa Adams medal will likely be for sale as well.

For more information regarding the gold coin series, visit the U.S. Mint or the CoinNews sister site about First Spouse Coins.