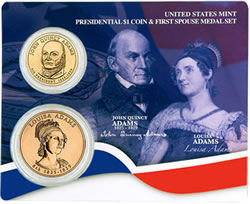 The coin and medal are held in a durable plastic card enhanced with beautiful representations of the President and first spouse’s portraits, with issuance information on the back.

John Quincy Adam dollars were the second $1 coins released in 2008, and the sixth in the Presidential series, as he was the sixth President, serving from 1825-1829.

In the coming months, the remaining Presidential coin and Spouse sets for 2008 will be offered:

The set may be ordered through the U.S. Mint page:

A complete listing of U.S. Mint products with John Quincy Adam coins are available at:

i have a coin from 1825 from the 6 president of usa john quincy adams i want to know the price.