The Royal Canadian Mint (RCM) has announced they will unveil and issue $2 circulating coins Wednesday to honour the 400th anniversary of the City of Quebec’s founding. 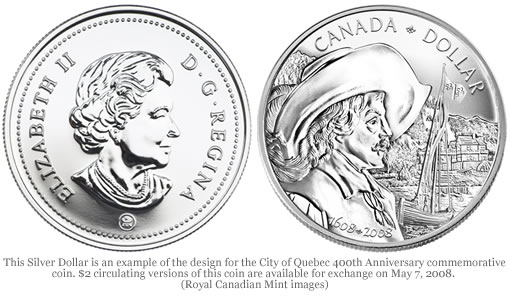 The public is invited to participate in the ceremonial event and presentation of the coins on Wednesday, May 7. The public may also exchange old coins for the new $2 commemorative coin honouring the city.

When the Mint initially announced the 400th Anniversary of Quebec City coin, Ian E. Bennett, President and CEO of the RCM stated:

"The Royal Canadian Mint prides itself on celebrating the richness of Canada’s historical, cultural and natural heritage on all its coins, therefore it is very fitting that such an important event in our country’s history be featured on a coin which will be exchanged and collected by people in the Province of Quebec, as well as in the rest of Canada.

The City of Quebec, internationally famous for its historical significance and old European charm, is a tremendous source of pride for Canadians and we are delighted to be participating in its anniversary celebrations."

The circulating commemorative coin was designed by Quebec jeweller Geneviève Bertrand and has a mintage limit of six million set.

According to the Mint’s statement, in attendance for the ceremony will be:

Location and time of event

The ceremony will occur on May 7 at 5:00 pm at the 2008 World Hockey Championship’s "FanFest," located in the Pavillon du commerce, adjacent to Quebec City’s Colisée Pepsi arena.

Those wishing to exchange their money for new coins may do so at 5:20 pm in the FanFest. In addition, anyone with tickets to the evening game at the Colisée Pepsi can exchange their coins between periods.