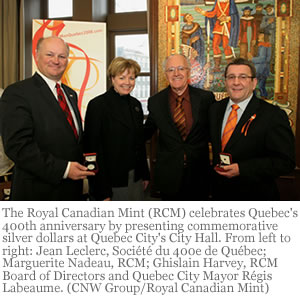 The coin was officially presented by Ghislain Harvey, member of the RCM’s Board of Directors and Marguerite F. Nadeau, Q.C., Vice-President, General Counsel and Corporate Secretary. Joining Mayor Labeaume in accepting this exquisite gift was Quebec 400th Chairman Jean Leclerc.

“As we celebrate our own centennial in 2008, the Royal Canadian Mint is very proud to be taking part in the milestone celebration of the 400th anniversary of the founding of Quebec City”, said Mrs. Nadeau. “Through this collector coin, we are commemorating an event of great importance to the history of Canada and the Province of Quebec.”

The design featured on the sterling silver dollar is the exceptional work of Longueuil, QC artist Suzanne Duranceau. The coin features a portrait of Samuel de Champlain with the “habitation” he built at the foot of Cap-aux-Diamants, now Quebec City, in the background. He had landed on the shore of the St. Lawrence River in 1608 at a place the local Algonquin people called “Kebec” or “where the river narrows”.

Only 65,000 2008 Proof Silver Dollars are available world-wide. A brilliant uncirculated version of this coin is also limited to a mintage of 35,000.

This same design is reproduced on a selectively gold-plated proof dollar coin, which is exclusive to the RCM’s 2008 Proof Set. A limit of 60,000 of these sets has been minted.

All of the Mint’s products are available directly from the Mint at 1-800-267-1871 in Canada or on the Internet at www.mint.ca. The coins are also available at the Royal Canadian Mint’s global network of dealers and distributors, as well as participating Canada Post outlets.

I think its nice that they are celebrating their 400th anniversary. Cheers!