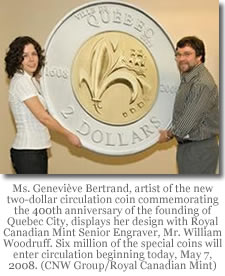 QUEBEC CITY – The Royal Canadian Mint is pleased to celebrate the 400th anniversary of the founding of Quebec City by issuing a commemorative two-dollar coin.

"I invite all Canadians to look for this commemorative coin in their change," said Ian E. Bennett, the Mint’s President and CEO.

"Six million of these coins will be put into circulation to be exchanged daily not only by Quebecers, but by Canadians throughout the country.

This coin is a striking way to pay tribute to Quebec City’s heritage, and to its significance in Canadian history.

The Royal Canadian Mint is pleased to join Quebec City’s citizens and admirers in celebrating the 400th anniversary of this famous city."

This coin was officially unveiled to the public at the IIHF World Hockey Championship’s “Fanfest”, before the start of the game headlining France and Belarus. Notably present at its unveiling were Mint spokesperson Véronique Cloutier, Marguerite Nadeau, Royal Canadian Mint Vice-President, General Counsel and Secretary, Jean Leclerc, Chairman of the Quebec 400th Anniversary Corporation, as well as other public figures.

"There are few North American cities that can celebrate a past such as that of Québec City. It is from the year 1608 that we truly started to become what we are today. Because the founding of Québec City also marks the founding of Canada," said the Honourable Josée Verner, Minister of Canadian Heritage, Status of Women and Official Languages.

The coin, designed by emerging jeweller and Quebec City native Geneviève Bertrand, depicts the founding of the city. It features a fleur-de-lis, a ship, and lines representing the waters of the St. Lawrence River.

This design was engraved on a two-dollar coin by Mint Engraver William Woodruff of Ottawa. Geneviève Bertrand practices her craft at a jewellery boutique in Saint-Georges-de-Beauce.

She was a finalist in several major Quebec jewellery design competitions before submitting the design chosen for the circulation coin honouring the 400th anniversary of Quebec City.

A coin distributed in collaboration with Desjardins Group

This coin commemorating the 400th anniversary of Quebec City is now available at Desjardins caisses throughout Quebec and Ontario, as well as at Caisses populaires acadiennes in New Brunswick.

"As a Premier Partner of Quebec City’s 400th anniversary celebrations, Desjardins Group is proud to be associated with this tangible sign of recognition for Quebec City," said Monique F. Leroux, Chair of the Board, President and CEO of Desjardins Group.

A collector card containing the two-dollar commemorative coin and a unique medallion bearing Quebec City’s coat of arms is also available from Desjardins Group branches, the Mint’s boutiques in Ottawa and Winnipeg, as well as online at www.mint.ca. This card also contains inserts into which Canada’s 2008 circulation coins can be added.

In addition to this collector product, the Royal Canadian Mint is paying tribute to the history of Quebec City by issuing a selection of sterling silver coins featuring the image of Samuel de Champlain earlier this year.

These collector coins, as well as other gift products are available by calling 1-800-267-1871, online at www.mint.ca, or by visiting the Mint’s boutiques in Ottawa and Winnipeg. These products are also available through the Mint’s world wide dealer and distributor network.

The Royal Canadian Mint, which is celebrating its 100th anniversary in 2008, is the Crown corporation responsible for the minting and distribution of Canada’s circulation coins. An ISO 9001-2000-certified organization, the Mint is recognized as one of the world’s largest and most innovative mints, offering a full range of extremely high-quality, specialized products and services to markets worldwide.

For more information on the Royal Canadian Mint’s history, products and services, www.mint.ca.

It’s a very nice coin I;M VERY PLEASED WITH MINE I GOT 2.