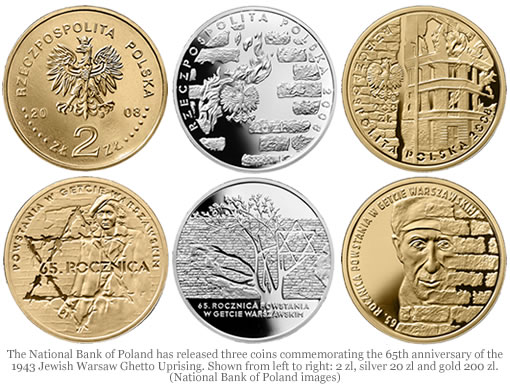 The two zloty coin features barbed wire in the shape of the Star of David and the face of a girl wearing a beret on the reverse.

The 20-zlotys coins depict the Star of David against a brick wall backdrop on the reverse and a tree, and the other side will show loose bricks and flames surrounding the Polish eagle.

The 200-zlotys commemorative coins depicts a burning house and the Polish national emblem on the obverse and the face of a man in a hat hiding behind a fragment of a brick wall on the reverse.

In April of 1943, several hundred Jews with home-made arms and weapons held off the heavily armed and well-trained German army for nearly a month within the Warsaw Ghetto in Poland. The resistance fought, and eventually lost, in their efforts to prevent the eradication of the ghetto. It was the single largest revolt by the Jewish resistance during the Holocaust.

Polish president Lech Kaczynski paid tribute to the heroes of the Uprising.

"We shall always carry a burden of the past in our hearts, of all that is horrid together with that which inspires for the future. We will enter a new road of hope of an enlightened Man. May the names of all heroes of the Uprising in the Warsaw he elevated and glorified."

The anniversary of the uprising’s start falls on Saturday, April 19, but commemorations were moved forward to today to avoid coinciding with the Jewish sabbath.

Each of the three commemorative coins are currently available through National Bank of Poland branches.

How do I purchase the Warsa Ghetto Uprising Zloty Coins?