The year 1809 was an important one for Austria in her fight against Napoleon and revolutionary France. On 21st to 22nd May the emperor’s brother, Archduke Charles, became the first general ever to defeat Napoleon in open battle, and in April a folk uprising in Tyrol against its occupation by Bavarian and French troops had begun. 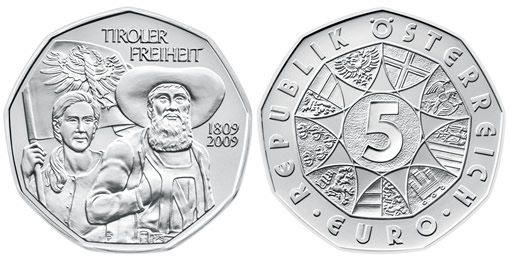 Andreas Hofer (1767-1810) was the innkeeper of the inn "Am Sand" in Tyrol, but he soon became the recognised leader of the Tyrolean revolt against the French and the Bavarians, who, besides being a foreign regime, were also trying to push through their revolutionary ideas of reform and had begun to abolish religious processions and pious practices held dear by the deeply religious catholics of Tyrol.

Arbitrary recruitment for the Bavarian army led to an uprising in Innsbruck on 9th April, 1809. In the following months Andreas Hofer and his folk army managed to best the Bavarian-French troops in three different engagements. Hofer and his followers were so successful that he even obtained recognition from the Imperial Court in Vienna as its designated commander of the Tyrolean resistance.

In the East things were not going so well. Napoleon had occupied Vienna and the emperor and his court had fled. Archduke Charles managed to defeat Napoleon at the Battle of Aspern in May, but his army was then soundly beaten by the French at Deutsch-Wagram two months later. The Emperor Francis I was forced to sue for peace.

By the Treaty of Schönbrunn  on 14th October, 1809, Francis had to forfeit considerable territory. Among the losses was Tyrol to the Bavarians. Hofer and the Tyroleans felt betrayed. They refused to lay down their arms and on 1st November at the third battle on Bergisel overlooking Innsbruck, the Tyrolean resistance suffered a crushing defeat.

Hofer fled into the mountains, but he was betrayed and arrested on 28th January, 1810. He was taken south to Mantua to be tried by military tribunal. Napoleon himself ordered his sentencing to death and his execution. On 20th February, 1810, Andreas Hofer ended his life before a French firing squad. In Tyrol he became and remains to this day a national hero of almost legendary proportions.

The 200th anniversary of the Tyrolean uprising against Napoleon and his Bavarian allies is an emotional occasion that only a genuine Tyrolean can fully appreciate. The uprising and the figure of Andreas Hofer, however, are also of great historical significance for all Austrians and for the history of Europe far beyond her borders.

In recognition of this important anniversary, the Austrian Mint is issuing a silver 5 Euro commemorative coin on 6th May, 2009.

The nine-sided coin shows a portrait of Andreas Hofer after one of the best known depictions of the Tyrolean hero from the mid19th century. Behind him stands a determined woman holding high the flag of Tyrol. She is Giuseppina Negrelli from South Tyrol. She represents the often forgotten role played by heroic women alongside the fighting men of the resistance.

The design was devised by chief engraver Thomas Pesendorfer. The second side is by Helmut Andexlinger and has the standard ring of nine provincial shields with the face value of five Euros together with the legend "REPUBLIK ÖSTERREICH".

100,000 pieces of the 5 Euro coin are available in special uncirculated quality in an informative and colourful blisterpack. Another 250,000 circulation pieces will be released at face value through the Austrian banks.

The new coin has already created excited anticipation in Tyrol and throughout Austria. It will be officially presented in a festive event in the Innsbruck Hofburg on the evening before it is officially issued.

The "Tyrolean Resistance Fighters" coin goes on sale on Wednesday, 6th May, 2009.

At the same time the annual Austrian coin set in special uncirculated quality will be issued in a maximum mintage of 75,000.