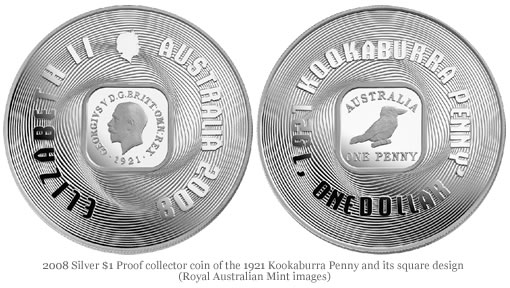 The Kookaburra Penny is noted for its square shape and the collector coin takes on that image. The obverse or heads of the coin bears the image of King George V while the reverse or tails side has the image of the ever popular Kookaburra.

In describing the pattern around the images, the Royal Australian Mint states:

Both images are encircled by intricate detailed lines that give an almost animated swirling appearance and framed with fresh and innovated styling and text.

There are no order limits in place for the coin. However, orders close down on April 25, 2008.

While the 1921 Kookaburra Penny is rare and could cost many tens of thousands to own, the collector version of the coin is within the grasp of everyday collectors.

The coin may be ordered online via the Royal Australian Mint product page page:

The specifications for the proof coin are: