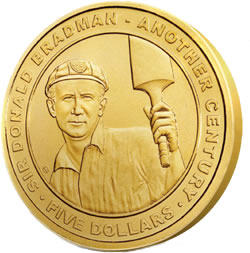 The Royal Australian Mint officially launched its latest collector coin commemorating the 100th Anniversary of Sir Donald Bradman’s birth on 27 August 1908. The $5 uncirculated coin captures "The Don" in a familiar pose, saluting the crowd after scoring another century.

"We are proud to release this collector coin which celebrates what would have been Sir Donald Bradman’s greatest century. He is revered in sporting history, locally and internationally, as the greatest batsman of all time.

Bradman’s performance on and off the cricket field is a true inspiration to all sportsman. He played an important role in the development of the game and shaping this great nation," said Janine Murphy, Chief Executive Officer of the Royal Australian Mint.

"On behalf of Cricket Australia, I would like to thank the Royal Australian Mint for releasing a stunning coin which is a great contribution to continuing the legend of our greatest sporting hero, Sir Donald Bradman"

The coin may be ordered online through the following Mint page:

Orders may also call be placed by calling 1300 652 020 or visit the Royal Australian Mint shop in Deakin, ACT.

According to the Mint, the uncirculated coin has been released in partnership with the Bradman Foundation. In August, the Mint announced a special website honoring Sir Donald Bradman, which is named the Greatest Century of All. It provides Bradman career highlights, statistics and achievements and an interesting interactive comparison with other modern cricket players.