The Royal Australian Mint launches the commemorative 2008 Northern Territory $5 silver proof coin, which is the fifth coin released since the start of the State Series in 2006. 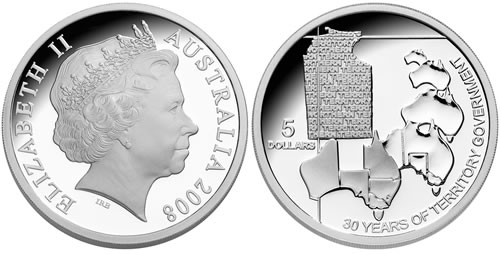 The Royal Australian Mint marks the 30th anniversary of self-government for the Northern Territory with the release of a commemorative five dollar coin.

This is the fifth coin to be released in the State Series, with coins commemorating 150 years of state government issued for South Australia, Victoria, Tasmania and New South Wales in 2006 and 2007. 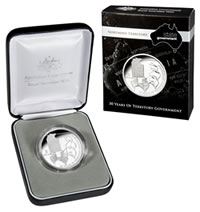 "If you have collected all of the State Series coins so far, then this $5 silver proof coin will be another star in this fine collection.

The Northern Territory is home to some of the most stunning landscapes and natural wonders our country has to offer.

We are pleased to mark this significant milestone with this coin." said Janine Murphy, Chief Executive Officer of the Royal Australian Mint.

The coin design features several maps of Australia and illustrates how the State and Territory boundaries have evolved over time.

The Northern Territory took shape slowly as an independent territory. South Australia took over responsibility for it in 1863, but relinquished the Territory to the federal government in 1911.

The Territory was then governed by Commonwealth administrators until 1974 when a Northern Territory elected Legislated Assembly was created. Full internal self-government under a unicameral system followed in 1978.