The design of the new coin portrays an eagle with wings spread, claws extended and body powerfully positioned to land. While the design by scientific illustrator Niklaus Heeb is majestic, the bimetallic composition of the coin is also intriguing. 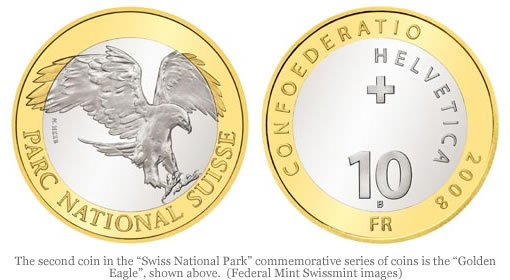 The outer ring of the coin is made of aluminum-bronze and the inner core from copper-nickel. The eagles wings spreads through both outer ring and inner core, highlighting its landing approach.

The Mints selection of the golden eagle design is aptly understood by reading their description of the bird of prey.

After the bearded vulture, the golden eagle is the largest domestic bird of prey and one of the most powerful predatory birds in the world. Females are always larger than males: the wingspan of the female is around 220 cm, that of the male around 200 cm. Its talons, the size of a man’s hand with rear claws often exceeding 5 cm in length, are an especially impressive feature.

The golden eagle’s majestic shape and its proud and determined look have led to it being adopted as a heraldic animal in many places. With their wide expanses of land in elevated mountain regions, good availability of food and many nesting opportunities, the Alps offer an ideal habitat for the golden eagle. Thanks to these conditions, the king of the skies has succeeded in surviving the former habitat destruction by mankind …

… golden eagles are once again increasingly to be seen in the Alps. The Swiss National Park in the Engadine and in the Münstertal valley is, for example, currently home to six pairs.

The "Swiss National Park" commemorative series started in 2007 with the release of the motif of ibex. The red deer commemorative coins is scheduled to release in 2009 followed by the marmot in 2010.