The variety of commemorative coins minted around the world makes collecting them interesting and exciting. The coins can provide a deep glimpse into significant events, historical insights and other driving factors for a country.

They can also represent simple or fun activities that excite and captivate their residents. A new 2008 Swiss commemorative coin with a face value of 20 Swiss francs falls mostly into this category. 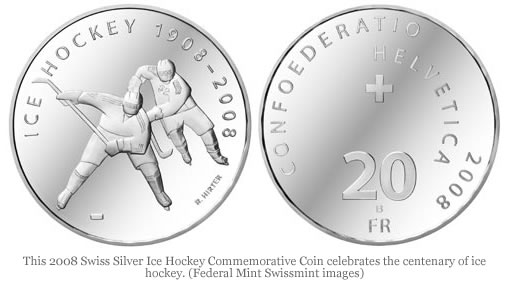 The Federal Mint Swissmint recently announced the new coin that celebrates the centenary of ice hockey. It was back in 1908-1909 when the first Swiss ice hockey championships were held and to commemorate that history a coin was designed that features the "tackling, strength, dynamic force and team spirit" of ice hockey.

According to Swissmint, ice hockey goes way back.

The history of ice hockey can be traced back to the 16th century. A game on ice by the name of Bandy is said to have existed in the Netherlands at that time. Bandy, generally regarded as the forerunner of modern ice hockey, is played with a small ball according to rules closely resembling those of football. The first proper match took place in 1875 in London. Just five years later, Bandy reached Switzerland, the mountains of Grisons to be precise.

At this time, it appears online ordering/pricing is available only in Switzerland. However, inquiries can be addressed to info@swissmint.ch or through tel., 41 031 322 60 68.