Coin & Numismatic News Oklahoma Quarters Minted, but Not Out of the Gate Yet 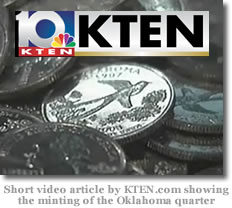 Striking of the first Oklahoma state commemorative quarters began in the U.S. Mint’s Denver facility this week with a single ceremonial push of a button.

Oklahoma’s First Family was on hand to receive the very first shiny minted quarters. In a NewsOK.com article, Oklahoma’s image is in mint condition, Governor Brad Henry was quoted at the event saying:

“I think there’s tremendous Oklahoma pride here today,” Henry said after the ceremony. “Coming on the heels of the state centennial, I think it’s appropriate that the Oklahoma quarter is the first one in 2008, and it gives Oklahoma a chance to shine throughout the land.”

While the quarter is now going through its production paces, it won’t enter public circulation quite yet. Hundreds of millions will be minted and then placed into circulation later this month. The video article by KTEN.com is currently the best source to see an actual photo or image of the Oklahoma quarter. 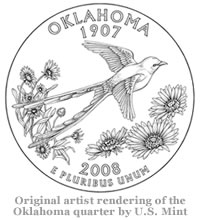 The tails or reverse of the coin features the Scissortail Flycatcher – Oklahoma’s state bird – in flight with its distinctive tail feathers spread. The bird soars above the Oklahoma state wildflower, the Indian Blanket, within a field of more wildflowers. The coin’s design also bears the inscriptions “Oklahoma” and “1907.”

The Oklahoma state quarters will enter circulation on Jan. 28, 2008. On that same date, consumers and coin collectors can purchase Oklahoma Quarter Bags and Rolls from the US Mint.

On Nov. 27, 2007, the U.S. Mint released artist renderings of each of the final state quarters for 2008. While the 50 State Quarters Program was set to conclude this year, it was extended when President Bush signed into law, The Consolidated Appropriations Act, 2008, which contained provisions for six additional non state quarters:

The Oklahoma quarter stinks!
Political correctness kept the design the people of Oklahoma chose
from being minted! Gov. (Goober) Henry didn’t have the backbone to
stand up for what the people wanted!!

The Oklahoma state quarter from looking at it on the computer screen, looks awesome. i really want to see the quarter and the oklahoma state bird in front of my ownself. nice job well done!-bravo

The Monroe Dollar error struck on state quarter. it is to believe that some mad it through and will be found. will this be the next most sought after coin. read the whole story.
http://coins.about.com/b/2008/02/05/major-monroe-dollar-error-coins-confirmed.htm?nl=1

i believe i will be looking in the Okla,rolls