The U.S. Mint has produced a whopping 33,774,200,000 state quarters since the inception of the 50 State Quarters® Program in 1999. The total does not include the several hundred million Arizona state quarters that started to hit circulation in June. And by the program’s completion with the final Hawaiian commemorative later this year, the Mint will have issued well over 34 billion state quarters. 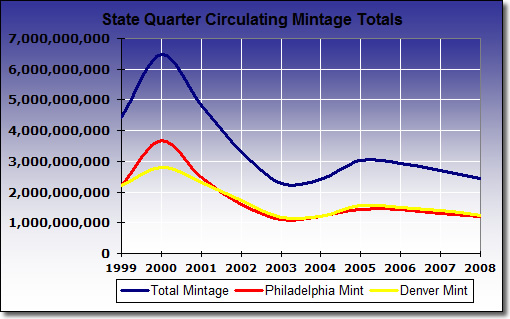 That’s quite impressive, despite a slowing U.S. circulating coin pace. And in reality, the Mint’s quarter production output is many millions higher.

The official numbers reflect only circulating quarter-dollars issued, plus the coins sold in the Mint’s bag and rolls program. They do not include the millions of quarters each year found in collectors products, like proof and uncirculated mint sets.

A better mental grasp of the sheer quantity of circulating state quarters may be gleaned by comparing mintage totals to the population. The U.S. Census Bureau’s clock has the American population currently at 305.3 million people. That means the Mint has produced enough money for every man, woman and child in the U.S. to own about 111 state quarters, or nearly $28 worth of the commemoratives.

For a comprehensive look at quarter production totals with charts and tables comparing each state, visit the CoinNews page: State Quarter Coin Production Figures by U.S. Mint, Year and State (1999-2008).

thats a lot of quarters.