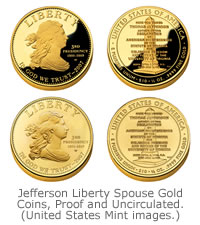 For the lucky few able to get one of the Jefferson Liberty First Spouse Gold Coins, take heart. If you haven’t already received yours, they’re on the way.

And the coins are, if you’ll forgive me… SWEEET!

Although variation in delivery dates were given based on order times, no orders were actually shipped when the Jefferson Spouse coins were first sold on August 30th.

The U.S. Mint receipts listed the coins in the "backordered" category for everyone.

That was somewhat disappointing given there were only 20,000 of the proof and 20,000 of the uncirculated Jefferson Liberty Spouse gold coins made and many experienced a difficult and backlogged ordering process.

However, given the demand was large and the supply low, most who managed to get their order through were just happy about that.

In my case, I ordered both the proof and uncirculated coins and the shipping date provided was for next Monday, September 24th. To my surprise, FedEx delivered the coins this morning, September 21st.

The Jefferson Liberty Spouse Coins are worth the price

Each coin is well packaged within attractive wrapping and wooden-like cases. You’ll probably open one of the coin cases and initially find your coin loose – not placed in the circular coin holder slot that would prevent the coin from moving around.

When the coin is slotted, it can be quite challenging to remove.

The obverse (front) stands out the most. In my opinion, it ranks toward the very top for modern coins. Ironically, the design is a reproduction of the Draped Bust Half-Cent made minted back in the 1800’s.

The coin’s reverse (back) is attractive as well. The inscribed epitaph is a bit difficult to read because of the small font and area.

Also, although not as prominent, it has that presidential $1 coin token-ish appearance.

The reverse inscriptions are surrounded by circular lines. Taken together with the center of the coin, there’s an almost bulls eye-like appearance.

Now, that’s an exaggeration and, again, it’s not as bad as the new presidential coins. But that’s what really pulls the mind toward the token look, which is a negative.

Overall, the coins are very pleasing to the eye. Photos really don’t due them justice.

Including shipping and handling, I paid $890.80 for both the proof and uncirculated versions. A quick eBay® search shows "Buy It Now" prices as high as $1,599.00 for both and active bids with well over a day left currently at $1,125.

It looks like many could turn a quick profit by selling their coins. However, the uniqueness of the coins are enduring and will be a long term collector coin for many, like me.