Coin & Numismatic News And Just Like That, the Jefferson Spouse Coins Were No More 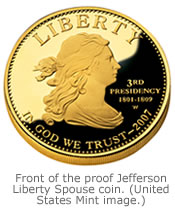 It’s not really news. It was expected. The Jefferson Liberty First Spouse Coins sold out. And fast! Both the 1/2-ounce proof and the 1/2-ounce uncirculated versions were hot items. Like the previous Martha Washington and Abigail Adams Spouse coins, they were gone within hours. 40,000 coins taken in a blink of an eye!

Well, not quite a blink. Many who ordered them would say it seemed like an eternity.

For those who were lucky enough to get in on the rush and buy one of the coins, the ordering experience wasn’t exactly fun. Although, you could say the anticipation was exciting!

Why? It was maddening actually getting through the system to place an order. The online process was extremely slow. There were timeouts, lost connections and other errors. And… did I mention SLOW?

For some, all’s well that ended well. That was me. I was able to finally buy both the proof and uncirculated versions.

Fortunately, I was still mentally numbed from a four hour wait just two days earlier at the DMV. The 30 minute ordeal to buy the new coins was a piece of cake in comparison! Yes, it took 30 minutes.

I hope anyone who spent their time was at least able to place an order. To give an idea of the frustration some experienced in buying the presidential spousal coins, I logged what I had to go through:

Fun, right? But again, I was happy to at least get the new coins. I’m not a normal collector of such coins. The Jefferson Liberty Spouse coins are just more appealing than many other coins the United States Mint is currently producing. The lower mintage numbers are also attractive.

There are already forum discussions from those who were able to buy the coins. Many intend flipping (selling) their coins to make some money. I’m keeping mine!

There’s a very small chance you can still buy one of the coins at the U.S. Mint web site. They’re still in the online shopping cart. However, you’ll notice that an order only registers as one that’s on the "waiting list".

Unless someone cancels their order or one doesn’t go through for another reason, the list won’t be used. Given that the wait list was put out just hours after the coins initially were offered, it’s likely the list is already very long.

There’s always the next series!

I experienced the same slow response on the US Mint site (as expected) and I was using three computers trying to order a Proof coin. I finally was successful at 12:40pm. I received an email confirmation, and days later logged into the mint site with my personal ID and Password to verify (for my peace of mind) that my order was indeed there. It was, then I noticed my order had a date/time stamp of Aug 30th, 12:40am. What! AM! Now I don’t know if my order will get kicked out by some mint computer program finding any orders placed… Read more »

My experience with the bad order date/time stamp was just like yours.

I figured it was probably fine in the “real” order database or that everyone would have the same problem and get corrected in another way, but it edged up my concern.

Fortunately, I went back to track the order a few days later and I noticed the phrase, “your order request is in process”. It also had the expected shipping dates.

[…] That was somewhat disappointing given there were only 20,000 of the proof and 20,000 of the uncirculated Jefferson Liberty Spouse gold coins made and many experienced a difficult and backlogged ordering process. […]