On Jan. 30, the U.S. Mint will release their first products containing one of the four $1 coins — rolls and bags of Ohio dollars. Other Innovation products will follow in the spring, summer and fall.

Introduced in 2018, the multi-year series of dollars offers reverse designs that recognize America’s ingenuity by highlighting pioneering efforts of individuals or groups from each of the 50 states, the District of Columbia, and the five U.S. territories. (Learn more about the U.S. Mint program.)

The Ohio $1 Coin design depicts two strong hands grasped together, the upper arm pulling the lower arm upward, representing the support and strength required by both parties on the Underground Railroad. A chain fastened to a rustic shackle around the lower arm’s wrist snaps and fragments, alluding to the hope of freedom. The inscriptions are "UNITED STATES OF AMERICA," "UNDERGROUND RAILROAD," and "OHIO."

The Louisiana $1 Coin design depicts a Higgins Boat as it would have been deployed during World War II, with its innovative landing ramp open against a beach. Included inscriptions are "UNITED STATES of AMERICA," "THE HIGGINS BOAT," and "LOUISIANA."

The Indiana $1 Coin design features a series of vehicles that showcase Indiana innovations from yesterday and today. From top to bottom, the design includes an early style gas automobile, a representation of classic car production, and a recent model of an Indy style race car. Inscriptions are "UNITED STATES OF AMERICA" and "INDIANA."

The Mississippi $1 Coin design features a pair of human lungs in the background, while a surgical assistant passes forceps to the surgeon during the first lung transplant surgery. Inscriptions are "UNITED STATES OF AMERICA," "FIRST HUMAN LUNG TRANSPLANT," and "MISSISSIPPI."

Designed by Justin Kunz and sculpted by Phebe Hemphill, major obverse (heads side) elements are common across every $1 coin in the series. They offer a depiction of the Statue of Liberty in profile along with inscriptions "IN GOD WE TRUST" and "$1."

Excluding the introductory 2018 dollar, obverses also bear a privy mark of a stylized gear which represents industry and innovation. The gear’s depiction changes slightly every year.

Edges of all $1 coins are incused with their year of minting, a mint mark representing where they are produced, and "E PLURIBUS UNUM."

Dollars Not Released into Circulation

Dollar coins have not been issued into circulation since 2011. The U.S. Mint manufactures them solely for numismatic products.

Finally the Higgins Boat is recognized. Took them long enough.

I had always known this as the LCVP; come to find out it also went by “Higgins Boat.” 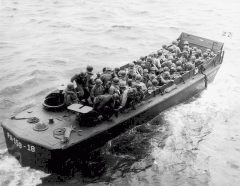 There’s an interesting story behind that.

For one, I can’t imagine how the D-Day landings could ever have been accomplished without that one and its heavier duty relatives the quite sizable Landing Ship Tank and its piggybacked smaller version Landing Craft Tank.

I must admit I was very surprised by Ohio’s. I would have bet on something to do with the Wright Bros. Indy makes sense. Had no clue about any Louisiana and Mississippi innovations- but the Higgins Boat design makes for a great coin.

I was less surprised than I was impressed by the theme of Ohio’s innovation. What a crucial development to be able to lay claim to, not to mention the image on that dollar is as powerful a one as I’ve ever seen on any coin bar none. Besides, the legacy of air and space travel that Ohio has given to the nation was already well commemorated on the Ohio State Quarter, so now all the major bases can be considered to have been covered. 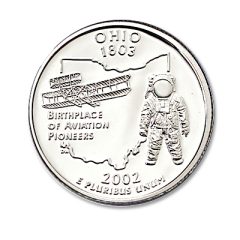 Additionally, Indiana is a nice looking coin especially for us car enthusiasts. That being said, it was the Mississippi dollar that really threw me for a loop and opened my eyes; I wouldn’t have thought in a million years that the lung transplant was originated in that state. Good for them and shame on me for having such negative preconceptions.

It’s certainly meritorious for being on a coin, but what exactly is Ohio’s unique claim to “innovating” it? If there is a history for Ohio claiming it, I’d really like to learn what it is. My understanding is that there were many routes and people involved across several states and Canada and Mexico, and not all necessarily involving Ohio.

ohio had a sizable abolitionist population that was more willing to help out the escaping slaves (unlike other states, who tended to have more passive citizens), so it wound up with a larger network than other states. I don’t think it was the ‘first’ state to have it however, though there is really no way to know that for sure (it being ‘underground’ it wasn’t exactly documented very mch)

Thanks for that info c_q. I’m by no means up on the history with regards to Ohio but would like to know.

I would think this is true of so many “innovations” that this dollar series is commemorating, as over the lifetime of our country many ideas, concepts and developments underwent birth and growth in more than one state simultaneously, likely with a multitude of variations and at a different pace, with all of that creative ingenuity and subsequent productivity sooner or later touching other instances of it geographically and thereby coming to a sort of combined fruition.

yes I have noticed that also. sure there are the clearly defined inventions like airplanes and telephones you can tie to a specific state because of the development being done by a small group of people. I have a harder time with inventions/innovations that are large in nature and unlikely to be developed primarily in one state, such as maryland’s space telescope claim. But the ones I really dislike are ones that aren’t even really innovations at all, like new york’s canal boat coin – give me a break those boats are copies of what has been running around canals… Read more »

Good point, c_q. It’s almost as if some of the states are reverting to the types of themes that were chosen due to their “local” prominence for the State Quarters when in fact that isn’t really the thrust of this new dollar series at all. By the way, for any number of reasons I bailed on these Innovation Dollars as of last year.

Kaiser, I’m almost there with you but am still hanging on expecting something to catch on—but it really seems like this series is just ho-hum. Who would have thought American innovation would be so boring?

I think you hit it right on the head, Major D, as to what the drawback is of these “Innovation” coins; it’s not at all clear or obvious, at least from those we’ve seen so far, that each state’s most impactful development was in fact the one chosen.

I’ve had some further thoughts, Major D, about what you said in your comment regarding the unanticipated negative surprise and overall disappointment of finding that what is being trumpeted as true American Innovation has pretty much ended up being on the boring side. Considering our nation has come up with more new ideas on so many fronts and levels than likely any other country in history and around the world, how indeed did the Mint ever conjure up such a generally lackluster list of State achievements for this multiyear dollar coin set? Part of a the shame regarding this is… Read more »

Yes, agree about NY’s canal. I think a much better innovation on the coin would have been the Niagra Falls hydroelectric plant. Who exactly is voting on this or making the decision?

Illinois in 2024 should have the skyscraper. And I look for California (in 2026?) to have the cinema/motion picture industry.

And now we’re getting down to brass tacks here, Major D, with “names being named” so to speak, and I agree that as per your excellent example the Niagara Falls Power Plant is much more of a unique innovation than a typical, ordinary Volga-like canal. I also like the idea of tall buildings for the Illinois coins, most especially so because Chicago is the birthplace of the skyscraper. And what could possibly be more California-esque than motion pictures.

or how about the Brooklyn Bridge or subway system? a lot of innovation there.

The Brooklyn Bridge is a good one, though for iconic New York masterpieces it’s given a run for the money by the Chrysler Building. As for the subway, unless I’m sorely mistaken Boston beat New York to the punch in that particular regard.