The United States Mint is now selling a bronze version of the silver medal released as a companion to the 2020 Women’s Suffrage Centennial Silver Dollar recognizing the 100th anniversary of the 19th Amendment’s ratification. The collectible was expected to launch in 2021 but instead debuted earlier this week.

This Women’s Suffrage Bronze Medal is available for $20 without limits. The original silver medal was a part of a set which included a proof Women’s Suffrage Silver Dollar. Sold for $120, sales of this set reached 9,996.

Created by Beth Zaiken and sculpted by Renata Gordon, obverses (heads side) depict a child’s reaching hand, amid adult women’s hands and arms holding up a heavy weight — a kind of "foundation" of stone. Inscriptions on the stone read: "WOMEN’S SUFFRAGE CENTENNIA."

Designed by Patricia Lucas-Morris with Gordon also sculpting, medal reverses (tails side) feature text of the 19th Amendment, ratified in 1920, written on the stripes of the flag of the United States. "1920" is inscribed at the bottom.

The Women’s Suffrage Bronze Medal is available directly from the U.S. Mint via their online store for Humanitarian and Cultural Medals.

First the Mint hikes its bronze medal prices four fold and then expects its customers to go on purchasing them as if nothing untoward happened. Points for trying, I suppose.

What I don’t like about the bronze medals is that the mintages and sales are not given, the production seems to be open-ended, and they are packaged in cello without boxes or COA’s.

You gave me a really good chuckle there, Major D, because from what I am able to discern thanks to your comment there might not be much of anything at all about the Mint’s bronze medals that in any way appeals to you.

Hey Kaiser. I actually like the look of the bronze on many medals, but not necessarily the designs. Numismatically (for the reasons mentioned) I cannot rationalize buying any- especially at the inflated prices. This suffrage one has no mint mark and no strike date just like most of the other medals- so nothing that identifies who made it and when.

Well, Major D, that’s a point well taken, and that attraction added to the theme and design was more than enough reason for me to pick up the New Frontier Bronze Medal, 1.5 Inch Diameter version, and at a time when it was still going for $6.95 instead of the current price of $20.00 each. Even the case for that size medal goes for $15.00 now, which is roughly three times what I once paid for that adjunct item. 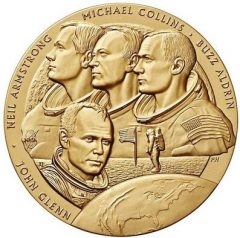 And for purposes of general edification, the reverse of same… 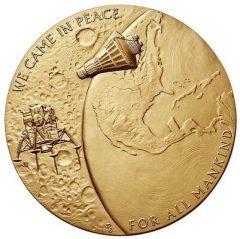 A good looking medal! I have several 1.5-inch silver Mercury and Apollo medals from the 60’s made by Spacecraft Medals

Why thank you sir! Knowing that your space medals are silver I would surmise they must have a really nice look going for them, not to mention that always awesome “off-planet” theme.

Major B
Reply to  Kaiser Wilhelm

Major D
Reply to  Major B

Well now, you sure are reading a lot into a chat about medals while at the same time trying to be me- certainly says a lot about you and your wistful imaginings.

Believe it or not, Major D, but I’m seeing this as a sort of minor victory. After all, this is only the first troll we’ve had a visit from since He Who Shall Not Be Named “left the building”, so to speak.

Actually it’s the second, but these foolish phantoms fade from any useful memory so quickly it hardly matters what the actual count is.