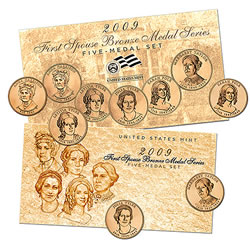 The set became available at 12 Noon ET and contains bronzes that bear the likeness of the First Spouse Gold coins which were released throughout 2009. (Margaret Taylor First Spouse Gold Coins were issued today as well.)

Each set sells for $15.95 and comes with the medals packaged in Mylar®, then inserted into a folded card containing product information. A custom-made envelope is also included. The Mint’s standard shipping charge of $4.95 per order will apply.

Each of the medals may also be purchased separately for the price of $3.50 each.

The five presidential spouses featured in this set are:

The obverse of the Letitia Tyler Bronze Medal was designed and sculpted by United States Mint Sculptor-Engraver Phebe Hemphill.

The reverse, designed by AIP Master Designer Susan Gamble and sculpted by United States Mint Sculptor-Engraver Norman E. Nemeth, depicts Mrs. Tyler and her two oldest children behind their Cedar Grove Plantation, where she and John were married in 1813.

The reverse design depicts President and Mrs. Tyler dancing together at a White House Ball.

The obverse and reverse of the Sarah Polk Bronze Medal was designed and sculpted by Hemphill.

The reverse design depicts Mrs. Polk working in the White House in support of her husband’s career.

The obverse of the Margaret Taylor Bronze Medal features a portrait designed by Hemphill and sculpted by Vickers.

For images of all the medals, see First Spouse Medal Images.

Those interested in purchasing the five-medal set can do so online at the Mint’s website: www.usmint.gov or by calling the toll-free number 1-800-USA-MINT (872-6468).

The United States Mint, created by Congress in 1792, is the Nation’s sole manufacturer of legal tender coinage.  Its primary mission is to produce an adequate volume of circulating coinage for the Nation to conduct its trade and commerce. The United States Mint also produces proof, uncirculated and commemorative coins; Congressional Gold Medals; and silver, gold and platinum bullion coins.