The event’s top lot is the finest known Maris 50-f and the only Mint State Head Left Copper.

"Mike Coltrane was a long-time student of numismatics, and a delightful person, a true gentleman of the highest ethics," says Jim Halperin, Co-Founder of Heritage Auctions. "His father was a banker, and Mike’s interest in collecting coins and currency dates all the way back to his childhood."

Achieving the same $180,000 result was a prime example of the Augustus Humbert United States Assay Office fifties that are icons of American coinage, a beautiful, octagonal 1852 Assay Office Fifty Dollar, AU55+, CAC. They originally were introduced in 1851, and various iterations of the octagonal design were manufactured through 1852.

A 1794 Half Cent, MS64 Red and Brown, CAC, the second- or third-finest known example, reached $168,000. The Breen-Hanson Condition Census, now nearly three decades old, includes 11 examples from this die pair that grade Uncirculated – just six of which have a recorded provenance that ends 60 or more years ago.

A 1797 C-1, B-1 Half Cent, MS65 Brown, CAC, arguably the finest surviving example from these dies and immediately identifiable by the misplaced "1" that is too close to the bust, drew a winning bid of $144,000.

One of the most memorable and important Colonials that once was a part of the collection of Eric P. Newman, a 1792 Washington President Cent, XF40, CAC closed at $132,000. Featuring the "T" below Washington’s shoulder, this is a singular piece that holds considerable historical significance. There are two major types of the Washington President cents distinguished by their reverses, featuring either the eagle and 13 stars that appear on this example or the General of the American Armies.

Complete results can be found at ha.com/1350.

This is why I don’t collect 18th century coins, TOO expensive. I believe the earliest American coin I have is an 1836 large cent.

Surely, Antonio, that is a gap in our collections that I would guess quite a number of us in the numismatic community endure. I would personally I have to extend that gap to include 19th century and early 20th century coinage also for similar reasons. 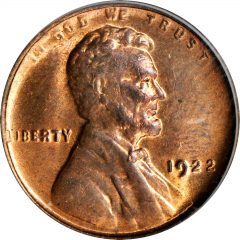 Aha, Antonio. The coin that fills a hole stamped into many varieties of Lincoln Cent Folders, a spot which many collectors say shouldn’t even exist. On the other hand, pictured below is the 1922-D cent no one has qualms about. 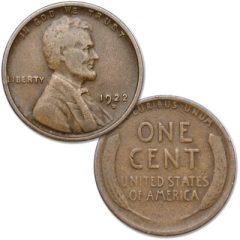 That’s a big negative, Antonio. The 1922 Missing D Cent is completely out of my league and the 1922-D is a shade above my pay grade.