DALLAS, TX – With the final tallies for Heritage’s April 28 to May 3 Milwaukee Central States Numismatic and Currency auctions in at more than $20 million jointly – $16.9 million in rare U.S. Coins and $3.1 million in rare currency – the totals of the two auctions, in combination with the previous week’s Chicago International Coin Fair World Coin auction – a $5.2 million event – made for a 10 day stretch that totaled more than $25 million in total for the company. All prices include Buyer’s Premium. 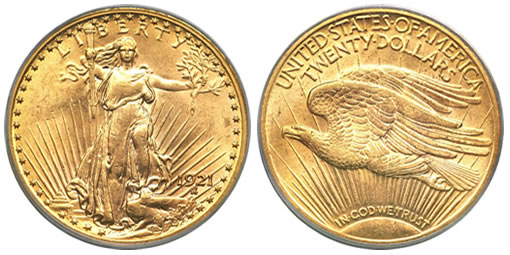 "We continue to see great prices across all categories, with gold simply dominating," said Greg Rohan, President of Heritage. "The economy is definitely improved, so we saw less volume as collectors don’t absolutely need to sell. That said, however, the market continues to climb past the previous record 2007-2008 levels on many coins."

The rare U.S. coins portion of CSNS saw a superb 89% of lots sold by value and 92% by total number of lots, contested by just more than 7,250 bidders, while the rare currency sessions saw a highly respectable 86% of lots sell by value and 94% by total lots, with 1,915 bidders vying for the offerings.

The top lot in CSNS was the Select 1921 Saint-Gaudens Double Eagle MS63 PCGS, Ex: Norweb, an historic absolute and condition rarity with few peers in the world of numismatics, which brought $218,500.

"Gold currently rules, and the king is Saint-Gaudens," said Rohan, "and the 1921 Saint-Gaudens double eagle is a premier rarity in the series, ranking as the third rarest regular issue, behind only the famous and ultra-rare 1933 and 1927-D examples. The price that this very smart collector paid for this amazing and famous coin is money very well spent."

On the currency side of CSNS, high dollar Federal Reserve notes were the chief objects of collector affection, as a St. Louis Fr. 2221-H $5000 1934 Federal Reserve Note, PMG Choice Extremely Fine 45 Net, only the third example of a 1934 $5000 from this district that Heritage has ever handled, tied for the highest lot in the auction with a final price realized of $69,000.

"There’s always demand for the top Federal Reserve notes that come on the market," said Allen Mincho, Director of Currency Auctions at Heritage. "Especially one as rare as the St. Louis $5000, coming as it does from a district that produced the fewest notes of any, save the Cleveland district, from which we are still waiting for even a single note to surface."

Further Rare Coin Highlights include, but are not limited to:

Further Currency highlights include, but are not limited to: