The only privately-owned example of this exceptional banknote — the other is in a much lower grade and was transferred in 1978 from the Treasury Department to the Smithsonian Institution — this Fr. 1202 $100 1882 Gold Certificate PMG Very Fine 30 from The Allan J. Goldman Collection finished atop a list of 10 lots that drew six-figure results.

"You have to remember, only the first 9,000 that were printed and issued were hand-signed by Thomas C. Acton, who served as the superintendent of the New York Assay Office, Assistant U.S. Treasurer and the founder and president of the Bank of New Amsterdam," says Dustin Johnston, Vice President of Currency at Heritage Auctions, "and of those, only two are known to have survived — a microscopic survival rate. With the other known survivor secured in the National Numismatic Collection at the Smithsonian, this is a remarkable example that immediately assumes a prominent position in its new collection."

The sole finest-graded 1928 $10,000 Federal Reserve Note represents the ultimate combination of rarity and condition: it is one of just 10 known for the type … and two of those are housed in museum collections.

A Fr. 2231-B $10,000 1934 Federal Reserve Note. PCGS Banknote Choice Unc 64, once a part of the famed $1 million display at Binion’s Horseshoe Casino in Las Vegas, more than doubled its pre-auction estimate when it climbed to $312,000. This historic banknote, with serial number B00003059A, was part of the renowned display that was composed of 100 Series 1934 $10,000 FRNs on the New York district framed by a large gold-color horseshoe. The open end of the horseshoe was on the bottom and the notes were exhibited in five columns of 20 notes each; the note sold in this auction is one of the nicest examples featured in the display.

Also unique in private hands was a Fr. 1203 $100 1882 Gold Certificate PMG Choice Fine 15, which drew a winning bid of $300,000. All of the major Gold Certificate offerings were from the first issuing period, prior to 1891. Among the most important of these rarities is the Fr. 1203, featuring the Signatures of Blanch Bruce and A.U. Wyman, who served jointly in the Treasury from April 1883 to April 1885. This magnificent note is one of just three known examples; the two others are part of the Federal Reserve Bank Collections in Richmond and New York.

Another high-denomination prize in the event was a Fr. 2220-F $5,000 1928 Federal Reserve Note. PMG Choice Very Fine 35, which rode a surge of more than a dozen bids to $216,000. Track & Price has enumerated just 19 serial numbers for the 1928 Series as compared to 109 for the 1934 Series. The serial number on this note is F00000077A and has been included in the census data for years. The 1928 notes have the "redeemable in gold on demand" obligation clause, while the 1934 notes sport the "redeemable in lawful money" obligation clause.

Complete results can be found at HA.com/3589.

If the Federal Reserve Notes prior to 1933 were redeemable in gold or “lawful money”, what indeed then were the Notes themselves, and by extension the Federal Reserve Notes we use now, considered to be? Have we in fact been passing “unlawful money” back and forth for the past ninety years, and if so shouldn’t the Secret Service acting in their capacity as Treasury Enforcement Agents immediately be put on the case to round up all of this counterfeit cash?

Thank you, East Coast Guru, but if my supposition is in fact credible then we as citizens have for decades allowed our own government to pull the wool over our eyes.

That would be former President Richard Nixon. 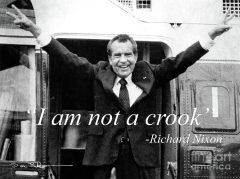 … and don’t forget Our Friend.

Yes my paternal grandfather had to do that. I wouldn’t have, in fact, I would have done the opposite and gathered all the gold coin I could get my hands on. I remember when President Ford rescinded that Order. Now the gold rush is on! Or is it?

I’m one hundred percent with you on this one, Antonio. Just because some big cheese wants your gold doesn’t mean you actually have to hand it over, and so very obediently at that. What the old man couldn’t see he couldn’t confiscate; didn’t they know that?

Wasn’t it opposition to precisely this the kind of a draconian measure we as future Americans launched our Revolution for?

I have one of these which I got from my bank some years ago. I recognized it due to the lack of the motto on the reverse (“In God We Trust”).

So sometimes we believed we did, at other times we either weren’t sure or didn’t care.

I often have a rather dark chuckle when both of the national parties engaged in a typically murderous conflict claim to have god on their side and their side alone. How exactly do they think this works with regard to whatever vision of supreme being they hold dear to themselves; does he or she simply flip a coin?

Pictured below is the official belt buckle of the WWII Waffen SS with “Gott Mitt Uns [God With Us] prominently displayed along with the SS Death’s Head insignia. 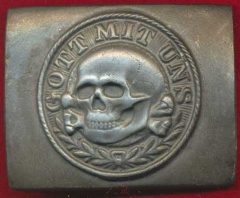 ​“Those who cannot remember the past are condemned to repeat it.” – George Santayana

From my observations, our society seems to forget the lesson of the past, if not the event itself, after about 20 years. I am talking the average event from the past. Larger events, longer times, perhaps very much longer. Pearl Harbor would be a good example of something that has been remembered a long time in America. Yet it is quite likely there will come a time where people will know about WWII but not Pearl Harbor within it. Having little contact with young people of today, we might already be there. I am not saying it is not or… Read more »

Jeff Legan,
The real problem, I believe, is not that we as a society forget what happened earlier but rather that those of us who didn’t live through these events have no sense of what it felt like to actually experience them. It’s one thing to know that we have gone through many wars in our history, but it’s another to be fully aware of what it feels like to be caught up in the midst of them.

If they read about them, they will have a sense of what it was like to experience them. We forget because mostly we purposely do not pay attention to the past. (How often have you heard someone say “forget about that, it is in the past”?) We do not have the sense of what it is like because we do not care to. First hand accounts really bring past events to life. Read enough about other lives and viewpoints and you start to feel empathy for others. That has nothing to do with learning to avoid mistakes of the past… Read more »

Those are all very cogent, pertinent and useful points, Jeff Legan. I sometimes find it all too easy to forget that not everyone – in fact, perhaps hardly anyone – has any interest in or facility for absorbing and grasping knowledge regarding history beyond at most dates and places. The who and why, after all, demands a lot more from the student of history (or of anything else for that matter) than merely the where and when. To be fair though considering the rather dismal record of humanity’s behavior to humanity over time, it would appear that the avoidance of… Read more »

Good Sir Rich,
Most unfortunately, according to the evidence and from all appearances, even those who do remember the past are nevertheless all too often hell bent on going for a rerun blithely comforted by the delusional certainty of being able to emerge with a completely different outcome. 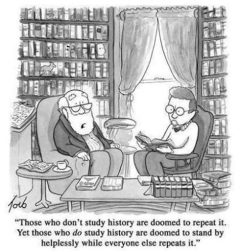 Good one. A version of it I had never heard before.

Jeff Legan & East Coast Guru,
One that incontrovertibly hits the proverbial nail right on the head.

I always thought Nazi’s were atheists but apparently not. Thanks for sharing the belt buckle photo.

You’re welcome, East Coast Guru. As for the Nazi’s theistic leanings, for all we know they may have worshipped Odin.

That is, East Coast Guru, in addition to Der Fuhrer, of course.