A magnificent hand-signed, triple signature 1882 $100 gold certificate, one of just two known examples, will become a centerpiece of a new collection when it is sold in Heritage Auctions’ Long Beach Expo US Currency Signature® Auction – Long Beach Oct. 5-7.

"Only the first 9,000 printed and issued were hand signed by Thomas C. Acton. Two are known to have survived — a microscopic survival rate. With the other known survivor in the National Numismatic Collection at the Smithsonian, this offering is incredible, perhaps once in a generation or even lifetime. Hailing from The Allan J. Goldman auction, its last offering was 20 years ago."

Another magnificent note that is unique in private hands is a Fr. 1203 $100 1882 Gold Certificate PMG Choice Fine 15 (estimate: $500,000+). Series 1882 $100 Gold Certificates were issued for more than three decades. However, there was a huge gap between 1891 and 1898 when no new plates or print runs were ordered for a number of the denominations, creating two distinct Gold Certificate issuing periods.

With no new notes being issued, those already in circulation were used heavily to meet the needs of the channels of commerce, even though hoarding of metal-backed notes was popular. All of the major Gold Certificate rarities offered in this auction are from that first issuing period, when print runs were miniscule compared to the second issuing period.

Among the most important of these rarities is the Fr. 1203, featuring the Signatures of Blanch Bruce and A.U. Wyman, who served jointly in the Treasury from April 1883 to April 1885. Three examples are known; the two others are part of the Federal Reserve Bank Collections in Richmond and New York. Major paper rarities are rarely in original and unaltered condition.

"When this note was last offered, it set a price record for a Small Size type note," Johnston says. "As the finest graded example of this massive 20th century type rarity, it should easily reclaim that title."

"It is the ultimate combination of rarity and condition," Johnston said.

This nicely preserved banknote, with serial number B00003059A, was part of the renowned display that was composed of a total of 100 Series 1934 $10,000 FRNs on the New York district framed by a large gold-color horseshoe. The open end of the horseshoe was on the bottom and the notes were exhibited in five columns of 20 notes each; the note offered in this auction is one of the nicest examples featured in the display.

Other top lots in the auction include, but are not limited to:

Information and images of all lots can be found at HA.com/3589.

definitely out of my price range. heck, even the face value of most of these is out of my price range. years ago (way before covid) you could sign up to get a free tour of the paper money collection at the SF federal reserve bank – they had a front and back example of pretty much every denomination and major type of paper money issued (without going into the weeds about plate-block number location changes and stuff) including the not-privately-ownable 100,000 note (so they actually had 2 on display). i’m sure it is all still there, but the lobby… Read more »

It’s sad, c_q, that so many public spaces are now closed due to security concerns.

I always found these notes curious. Canada still produces a $1000 note with the queen’s portrait on it. Soon it’ll be replaced by one with King Charles’ portrait.

actually, canada stopped making $1000 notes quite a while back, and just last year they removed their legal tender status (though you can still exchange them for current smaller notes). so unlikely they will make any $1000 notes with charles on them – at least, not until inflation goes up 1000% or so.

No, but considering his age, the RMC might be printing notes with William on them.

Can I hear one for George?

Unless the Queen’s diehard supporters arrange a posthumous return. 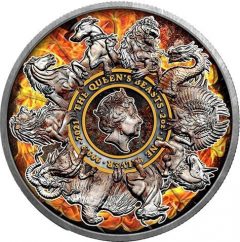 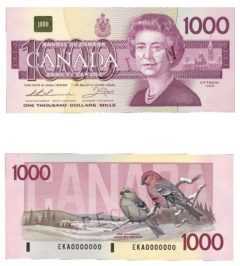 Not exactly what I was deliriously imagining, but it will certainly do.

I wish our bland U.S. currency could be at least somewhat near as attractive as that of just about every other country on earth.

I wasn’t previously aware of how long it had been since there was a King Charles on the Royal Throne in Great Britain. Here below, for example, is a King Charles II coin representative of his reign, one that lasted from 1660 to 1685…