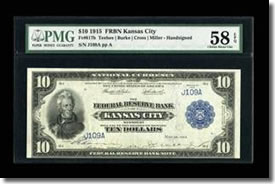 Dallas, TX – The Official Currency Auction of the FUN 2009 Convention in Orlando, presented by Heritage Auction Galleries, has posted prices realized exceeding $6.1 million. This was part of a weeklong series of Heritage auctions that also realized $52 million in U.S. rare coins sold at FUN, and $7 million in ancient and world coins sold at NYINC.

Nearly three thousand bidders participated in the 5,575 lot currency auction, and just below half of them were successful. Altogether, Heritage offered more than 19,000 lots at the FUN & NYINC venues. Overall, 87% of the FUN lots found new owners. All lots are currently posted at HA.com for post-auction research. The totals are expected to further increase as Post Auction Buys continue. FUN 2009 was Heritage’s – and the numismatic industry’s – third most valuable auction

"We were pleased with our FUN 2009 results," noted Allen Mincho. "With all of the dislocations in the national economy, we were pleased that demand for rare currency was only off a little from the 2008 highs – and at that, many notes sold at FUN for record prices. We think this is a very positive start for 2009, as the currency collector community responded with real strength for notes that they desired.

FUN was also Heritage’s first auction to extensively feature our new Video Lot Descriptions; the reception of bidders and consignors has been most gratifying. We invite you to visit HA.com and see for yourself. We also saw many clients participating – and winning – through our HERITAGE Live! online bidding system."

Click here for Greg Rohan’s videotaped comments on the FUN auctions and show.

In November 2008, Chad Hawk, a grader at PMG, discovered a previously unknown Federal Reserve Bank Note variety – hand-signed by the Kansas City officials, instead of engraved signatures and rubber-stamped signatures.

One of only three known elusive Star replacement notes of Fr. 123, with serial number 482.

This Educational $5, serial #29, featured broad, even margins on both front and back, with exceptional print quality, originality, and overall eye appeal; the only so-graded.

This is only the third known 1934 North Africa $10 Star note, making it the highlight of any collection.

A North Carolina trophy note: the only note known from this short lived bank, as well as a rare type and denomination from the state (with only eight such examples listed in the census).

This is only note that PCGS has graded at 68PPQ for this Friedberg number; the margins are astounding, the deep embossing original, and the centering of both sides is micrometer-perfect.

An exceptionally rare note with a great pedigree from the fabled Amon Carter, Jr. Collection. It is excessively rare: the sole example from Villisca, and only 63 examples from all US banks.

One of only nineteen examples known of this Friedberg number, and to our best knowledge, the third finest example known.

An excessively rare star note, one of only three Fr. 855b stars in the census and part of a consecutive pair which we sold in 1999. The PMG holder notes “Exceptional Paper Quality, Great Embossing.”

This is the most dramatic Confederate error we can recall ever seeing as the green overprint on this $2 is printed upside down. Confederate errors of any type are few and far between with this major error example being possibly unique for type.

This serial number 1 Federal Reserve Bank Note is a great rarity in this series. Despite the presence of many low number notes, including more than a few single digit examples, few number 1s survive. From The Robert Moon Collection of Low Numbered FRBN’s.