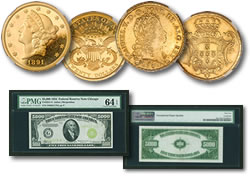 DALLAS, TX — The last numismatic blast of the summer of 2009 went off with an $18.4 million flourish in Heritage Auctions’ combined Long Beach U.S. Coin, Currency and World Coin events, Sept. 10-13.

The successful trio of auctions further heartened erudite collectors as the world reflects on a year ago as financial markets buckled. U.S. Coins saw solid results with a total of more than $9.4 million, while U.S. Currency’s strong showing amounted to more than $5.7 total, and World Coins continued its robust climb with more than $3.2 million in prices realized.

"We’re very satisfied with the results across the board," said Greg Rohan, President of Heritage. "As always, quality sells, and the top lots in each category certainly bore that out.

Bidding was spirited, more than 9,200 bidders participated and the overall results show us that the state of the numismatic market is quite sound; perhaps on its way to a full recovery, and beyond." 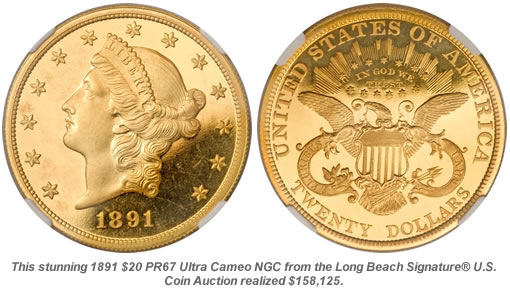 Struck just before George Heath, William Jerrems, David Harlowe, J.A. Heckelman, and John Brydon convened with 61 charter members at the Commercial Hotel at the corner of Lake and Dearborn streets in Chicago for the inaugural convention of the American Numismatic Association, it is an exceedingly rare early proof coin – one of only a couple of dozen known – procured from the U.S. Mint by one of the original members of what is easily the most important numismatic association. 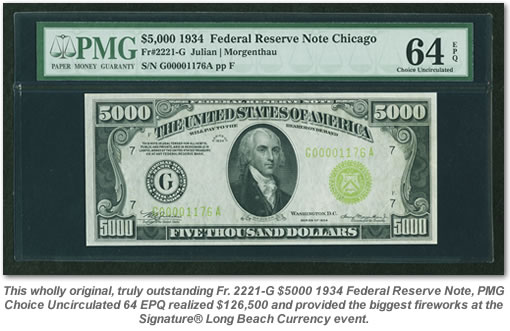 Another rare double eagle followed close, this one a gorgeous St. Gaudens 1920-S $20 MS64 PCGS from The Vegas Collection, which realized $132,250. While the mints in both Philadelphia and San Francisco struck double eagles in 1920 – the first since the production of the 1916-S coins -1920-S is rare in all grades. This is a classic rarity in a series that abounds with them. 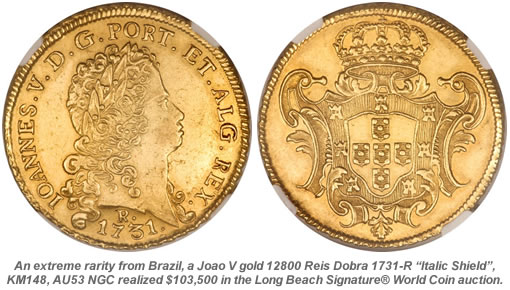 "This outstanding note easily ranks as one of the very finest $5000 notes to have come through the doors of the Heritage currency department," said Rohan. "It’s a fascinating new addition to the census of U.S. Notes, and well-valued at its final price."

Heritage’s World Coins business has seen a decided uptick in recent months, and the impressive total of the Long Beach Signature® World Coin auction, at just more than $3.2 million shows. More than the overall total, the quality of the World Coin treasures in the auctions have also continued to expand and impress.

An extreme rarity from Brazil, a Joao V gold 12800 Reis Dobra 1731-R "Italic Shield", KM148, AU53 NGC, which brought $103,500, topped the World Coin auction. It is one of only a handful known to exist and is considered nicer than the one in the "Espirito Santo Collection," the most important collection ever assembled of Portuguese and Portuguese colonial coins and the only other piece found in our research.

1925-D 1C MS66 Red PCGS: The Single Finest PCGS 1925-D Lincoln Cent known. One of only two certified in this grade by PCGS and there are certainly none finer, either technically or aesthetically. Realized: $74,750.

1920-D 5C MS66 PCGS, CAC: A Spectacular 1920-D Nickel, the finest certified by PCGS. This issue is a fantastic rarity. A look at our Permanent Auction Archives reveals that Heritage has sold only one other Premium Gem example, in March 2007. That piece was housed in a PCGS holder, but has apparently since been removed and the population data now indicates that the present coin is the only MS66 example certified by that service. None have been graded higher by PCGS, while NGC reports just two numerically finer examples (8/09). Realized: $74,750.

Carmen, OT – $10 1902 Red Seal Fr. 613 The First NB Ch. # (W)6719: New to the Census Unique Serial Number 1 Territorial Red Seal. An incredible note in every respect, and one of the most amazing highlights of the auction. This bank issued Territorial Red Seals only for less than two years before liquidating in February of 1905, with a total printing of only 286 sheets. By 1910, a scant five years later, with Red Seals still in active circulation, the amount outstanding had already dropped to just $650. This serial number 1 example is new to the census was offered in Long Beach for the first time to the numismatic community. Realized: $92,000.

Alva, OT – $10 1882 Brown Back Fr. 490 The Exchange NB Ch. # 5587: Serial Number 1 Oklahoma Territory – Unique With This Title. One of the most significant Territorials from a fantastic collection; one of only nine serial number 1 Territorial examples from all Oklahoma Territory banks combined, and the only note extant bearing this Alva bank’s first title, which was used for only a little more than two years and can be found only on the first 184 sheets of Territorials this bank circulated. Realized: $48,875.

Fr. 99 $10 1878 Legal Tender PMG Superb Gem Unc 67 EPQ: The Only Fr. 99 Graded Superb Gem New 67 to Date, Fr. 99 is a scarce and short lived type that is difficult to obtain in any grade, but becomes prohibitively rare at the highest grade ranges. At the very top of the grade scale stands this extraordinary note, which is the only example to date graded Superb Gem Uncirculated 67 (with none higher) by either of the two major grading services. Realized: $40,250

Christian VII Danish Asiatic Company Piastre 1777 – The Greenland Dollar, KM639.2, Davenport 412, Salv-52, AU58 NGC: The Famous Greenland Dollar, prized by collectors of Scandinavia, world crowns and trade dollars, and is easily one of the most famous coins ever struck. The Greenland Dollar is a bit of a misnomer in that it was struck for trade in the Orient, but includes the Danish island territories on the coin, namely Greenland, Iceland and the Faroe Islands. Realized: $46,000.