On Friday, Ventris C. Gibson took the oath of office as Director of the United States Mint. President Biden nominated Ms. Gibson on December 13, 2021. On May 4, the Senate Committee on Banking, Housing, and Urban Affairs advanced her nomination. The full Senate approved the nomination by voice vote on June 15.

Director Gibson becomes the 40th Director of the Mint. She is the first African-American to serve as Director, and the seventh woman to serve in this position.

"I am honored and humbled to be confirmed as Director of the Mint," said Gibson. "Since joining the Mint last October, I have been tremendously impressed by the dedication and professionalism of its workforce, and the outstanding quality of the circulation coins, bullion coins, and numismatic products made by the Mint."

Director Gibson is a U.S. Navy veteran who joined the Mint from the District of Columbia government, where she served as the Director of Human Resources. In this role, Ms. Gibson provided executive oversight and execution of human capital programs and services for nearly 37,000 employees. Prior to that, she served as Associate Deputy Assistant Secretary for Human Resources in the U.S. Department of Health and Human Services. She was responsible for the development, articulation, and delivery of Department-wide human resources policies, plans, and programs.

Director Gibson’s career with the Federal Government includes leadership roles in the Federal Aviation Administration, where she was Assistant Administrator for Human Resources, and the Department of Veterans Affairs (VA) as Deputy Assistant Secretary for Human Resource Management and its first Deputy Assistant Secretary for Resolution Management. She was the VA’s highest-ranking woman veteran and directed human resources management and civil rights programs affecting 230,000 employees.

During a career spanning more than 40 years in human resources executive and professional positions, Director Gibson earned numerous awards and commendations. She received an Exceptional Service and a Meritorious Service Award from the Secretary of Veterans Affairs, an Exceptional Service Award from the Secretary of Transportation, FAA Manager Association’s Leadership Award, National Hispanic Coalition’s President’s Award, and the Northern New Jersey Metropolitan Area’s prestigious "Woman of the Year" award.

A graduate of the Federal Executive Institute, Executive Technique, and Aspen Institute, Director Gibson attended the University of Maryland, University College. She has three children and four grandchildren.

Congress created the United States Mint in 1792, and the Mint became part of the Department of the Treasury in 1873. As the Nation’s sole manufacturer of legal tender coinage, the Mint is responsible for producing circulating coinage for the Nation to conduct its trade and commerce. The Mint also produces numismatic products, including proof, uncirculated, and commemorative coins; Congressional Gold Medals; silver and bronze medals; and silver and gold bullion coins. Its numismatic programs are self-sustaining and operate at no cost to taxpayers.

Sorry, I wasn’t impressed with her before … but congratulate her on her appointment as the Mint’s new “Deputy Director”. On the other hand, given her prior performance I suppose it can only go up from here ….

She did absolutely nothing to address my complaints and did not even have the courtesy of responding with a form letter to them. McFly. Are you there McFly??

Mike, she is now the Mint’s new “Director.” BTW, which McFly, George or Marty (or both)?

Since when does the Director respond to us “little people”?
Your call will be answered according to the order in which it was received. Thank you for holding.

I’m glad that’s finally settled. I was worried there.

All these different positions she has held, not one mention about what she knows about coins or making them. Does the director have no input whatsoever as to what coins are minted, when, how they are packaged and the household limits they set? Based on the article, she is a human resources executive. Is that all the director is, basically head of human resources for the mint? Is that all that is needed in a mint director? No coin knowledge (collecting and/or producing) needed? If Ryder had a similar background, that perhaps explains why coin collectors do not appear to… Read more »

Thanks for the information, Rich. I am going to look these people up over the next few days and see if any of them had any interest in coins. I told Kaiser Wilhelm recently he adds value to this site. You do too.

You’re welcome, Jeff, and thank you. Looking forward to finding out the results of your research into the last six US Mint Directors. My hypothesis is that none of them have any education, experience or background in Numismatics, Fine Arts, United States History, United States Coinage, Minting technology, the science of money, and scholarly antiquarianism (as well as commercial geology, mining, and metallurgy). In other words, no Isaac Newtons in the bunch.

Hi Rich, Here are my comments about the last 6 mint directors. I looked them up mostly on Wikipedia (4 of the 6). I saw I could get at least some of the info directly from the mint, but figured that would be one sided so I didnt even use it. Sorry it took so long to post this follow up, I have no excuse. I just did not feel like posting it until the last few days because I knew it would be a long post. Donna Pope–5th longest termed Director (10 years), appointed by Reagan. During Reagan’s term… Read more »

Jeff, I think it’s a problem in the private sector as well as public- where the Director or CEO has no experience in what the department or corporation actually produces. And even when they fail, they are able to golden parachute into another like position with a dept/corp making something totally different. Like a head football coach- losing season? you just move around the league like musical chairs

I’m gonna burn some Palo Santo wood and white sage myself. Does gluten free pasta pass as acceptable? I like it, all that matters. Maybe if I OM enough, the bees will join in. Anyone remember Mint Director Mary Brooks? She threatened that if people wouldn’t stop hoarding San Francisco pennies, she’d discontinue releasing them into circulation. Lived up to her threat in 1975, when they’re only available as proof coins. Still sell for $3.50 a coin. 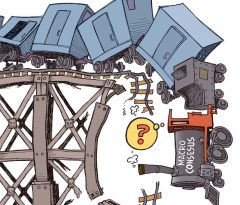