Seven proposed designs for the 2023 Native American $1 Coin were reviewed this week by the Citizens Coinage Advisory Committee (CCAC) and the Commission of Fine Arts (CFA). Each prominently features Maria Tallchief, the nation’s first prima ballerina.

Introduced in 2009 and authorized under Public Law 110-82, the U.S. Mint’s series of Native American dollars features annually changing reverses (tails side) that honor the important contributions made by Indian tribes and individual Native Americans to the history and development of the United States.

Obverses (heads side) of the dollar series are common, sharing Glenna Goodacre’s portrait of Sacagawea carrying her infant son, Jean-Baptiste.

Tallchief will also be honored on one of the five 2023 American Women quarter dollars, providing opportunities to pair the two coins in products and in marketing campaigns.

The CCAC and CFA recommended the same design, reverse #4, which depicts five figures representative of Native American ballerinas with Tallchief in the foreground. The design is also preferred by Elise Paschen, Tallchief’s daughter. The Treasury Secretary is tasked with making the final selection.

A spectacular performance in Igor Stravinsky’s Firebird in 1949 made a superstar of prima ballerina Maria Tallchief (Osage, 1925-2013). Tallchief and her husband George Balanchine transformed American classical ballet into an international leader in the art form.

In addition to Maria Tallchief, four other Native American ballerinas from Oklahoma achieved international recognition in the 20th century, including Maria’s younger sister Marjorie Tallchief Skibine (Osage, 1926-2021), Myra Yvonne Chouteau (Shawnee, 1929–2016), Rosella Hightower (Choctaw, 1920–2008), and Moscelyne Larkin (Shawnee-Peoria/Russian, 1925–2012). Celebrated as the "Five Moons" in mural, dance, and sculpture, together they inspired generations of American Indian dancers and helped break barriers in the dance world for other people of color.

All of the following candidate designs feature a depiction of Maria Tallchief dancing and the inscriptions "American Indians in Ballet," "United States of America," and "$1."

NA$1-01 and NA$1-01A includes the addition of five-pointed stars, a reference to Tallchief and her Native American ballet contemporaries. The constellation of stars in NA$1-01A is a reference to Osage creation stories and stage backdrops used in some of Tallchief’s performances.

NA$1-02 and NA$1-02A have the additional inscription "Maria Tallchief."

CONGRATS are in order and not without special privileges – today I will share my secret nomination for the 2024 Native American Dollar; following the tradition of Women in Power I hereby present: “Chief Smoking Bottom” for your viewing pleasure Sir Kaiser

Kaiser, did you get censored or just have 2nd thoughts about living on the edge – oops we both got censored that’s just not right but perfect example of who the real racists and censors are https://www.youtube.com/watch?v=Xk83VHblPhE 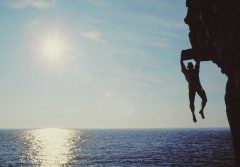 I already miss Chief Smoking Bottom. BTW, the 1877 Crazy Horse Surrender Ledger contains some of the most famous names from the Lakota Plains wars—names that are unusual to say the least. Here’s a sample: Fat Rump, Tanned Nuts, Snatch Stealer, One Brings S**t From Far Away…

Thanks Rich, we’re all going to miss her……….I’m sure the US Mint will honor her 150 years from now when it fits their agenda

Your technical skills and historical data to the rescue again

And that was one of the tamer names of the 13 crazy and funny names from the Crazy Horse Surrender Ledger. Among the 899 of Crazy Horse’s followers, there are a handful of names that might make you choke on your frybread. But as all activists know, there is nothing like making a fool of the authorities, and for some of the Lakota surrendering at Camp (later Fort) Robinson, they must have had a good time doing it. (Source: Indian Country Today, 09/13/2018)

Gotta Love All That Data https://www.youtube.com/watch?v=gdD8ObEUA7A 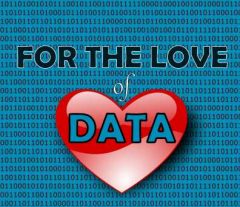 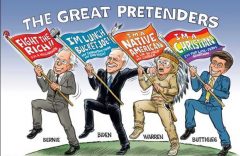 And a Go Fund Me

The Indians obviously have more clout than the Lesbians 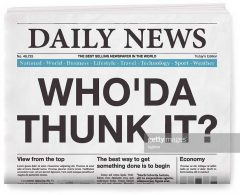 I’ll send all the man-haters your way Bro 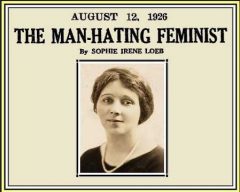 Happy Earth Day, Sir Kaiser! You did it again; that Booster you got seems to have boosted your speed and accuracy in achieving “First On” with the rapidity of a rabbit. 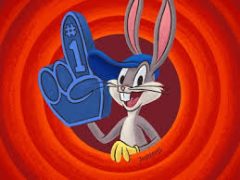 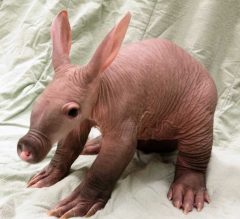 Happy Earth Day Rich, it looks like the Indians have made a comeback and perhaps Mother earth will as well https://www.youtube.com/watch?v=beTsDOBRs8I

Kaiser, do they really represent our interests? 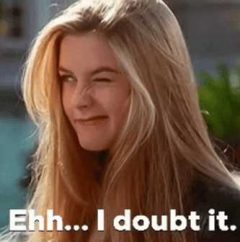 I have a question for you regarding the MS 70 Type 2 Silver Eagle. I was looking at the First Day of Production of 19K for this coin, I don’t think they all made MS 70. You can still get these PCGS Slabbed for $129. Since this is the first day the Type 2 was made I would think this is a future Rare Coin. I am thinking about buying a couple, thought I would get some opinions.

Since these are bouillon they have to be graded from an unopened monster box. Seems the mint came up with something new to put graders more (mandatory) into the money loop. Let’s see if they do First & Last boxes at the end of this year.

Absolutely, I have seen Caffeine Mike offer such a thing – your definitely putting a significant amount of trust and faith into the powers that be – but if it works out that’s great.

Look what I stumbled into while researching it 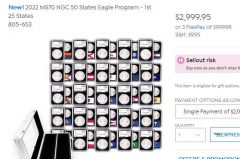 Actually, the Mint makes up it’s own prices and the suppliers comply or get the boot – these dealers don’t know what “spot” is because they have never had to pay it let-alone “above spot” let me repeat myself THIS IS A RIGGED GAME 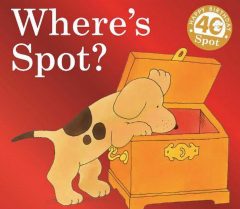 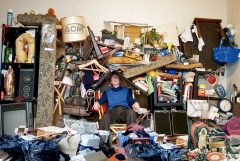 That’s a good one https://www.youtube.com/watch?v=I5n28hpMFBE

Allan, and there is a “sell out risk” 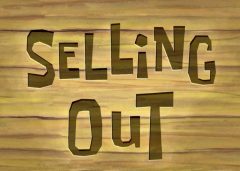 I, too, am amazed at the gimmicks used to justify the prices of certified coins. Especially ASE’s.

A jacked-up price just to have a picture of a state flag on the label?? Seriously?? And on the back of the label at that!

Whether P.T. Barnum actually said it or not, it still rings true – “there’s a sucker born every minute”.

BTW – you can get ‘em for a $1,000 dollars less at the site above. Quite a bargain, wouldn’t you say. So hurry and order before they’re all gone!

Educating each other thru connecting via coin news is what we are really here for and your statement Sir Kaiser, both entertains and educates as I believe many don’t even understand the difference between bullion and proof.

Thanks for clearing up a simply major bit of confusion – you are so granted the the official “Education Award” and all of it’s titles, privileges, honors and keys to the Universe and Big Toys.

SENZA, I don’t understand why the Mint won’t sell bullion directly to the public like it does proofs and medals and other coinage.

In my honest opinion – I think they do – it’s called the uncirculated ASE and it spares those who desire it – the nasty business of dealing with those shyster dealers.

I realize this is highly debatable and may allude to the Kaiser, education Award but this is how I see it…….

Unfortunately, it appears they are producing millions of Proof coins too 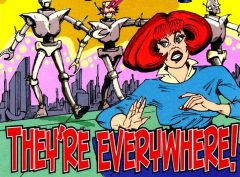 Wow, watching MM. $250 for the 5 proof AWQ in slabs. And $300 for the ASE proof W, and people buy them. And Kaiser, these are rare because the mint sold them out thru enrollments, you got to buy them from MM, NOW!!!

Don’t forget about the 28.89% interest rate on those HSN credit cards – we will need Rich, to figure this one out

I would like to present you with the confucious award as you have managed to confuse both of my 3 Brain cells – yet again.

Are we to assume the buyer will only be making the minimum monthly payment until the balance is paid off at an interest rate of 28.89?

And WHERE IS THE RED OAK 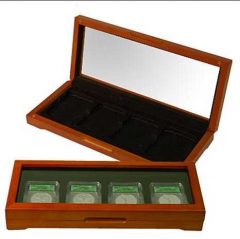 It’s the most factual example of what an unchecked Banana Republic The Graders and the likes of Caffeine Mike really are and it shines a very dark light upon the US Mint which already has an integrity problem.

Speaking of behind the scenes get a look at this

They were selling those photos for $280.00 I guess they had mansion payment to make

When I see Skanks like her and Crapdashians it erases any doubts that America is a 3rd World Shit Hole as some dictators have already pointed out.

SENZA, this is only a test. I wonder if there are any copyright ownership claims on this “Screaming Liberal” sky scream.

Sir Kaiser, LOL! Could you advance me a “Most Funny – Best Comment” Award so I could give it to you. Thanks in advance.

Anyone signed up for American Innovation Enrollments Anyone????????? https://www.youtube.com/watch?v=sa6Uj-D54Ts 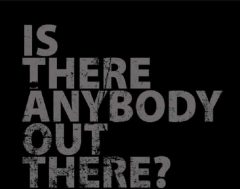 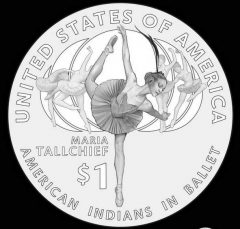