The United States Mint officially revealed which design will appear on quarter reverses (tails side) beginning in 2021. The U.S. Mint also published images of 2021 quarters bearing the design.

Depicting General George Washington crossing an ice-choked Delaware River in 1776 prior to the Battle of Trenton, the new quarters will be released into circulation beginning April 5, 2021.

They will mark a closure to the Mint’s America the Beautiful Quarters® Program. The program, which debuted in 2010 and features changing reverses honoring national parks and other national sites in each state, the District of Columbia and the five U.S. territories, ends with the coin honoring Alabama’s Tuskegee Airmen National Historic Site. The Tuskegee Airmen quarter will start circulating Feb. 1, 2021.

Public Law 110-456 directs usage of a crossing the Delaware image upon the completion of the America the Beautiful program. Seventeen candidates were reviewed.

The final design was selected by the Treasury Secretary after consulting with the Commission of Fine Arts (CFA) and the Citizens Coinage Advisory Committee (CCAC).

Created by Benjamin Sowards and sculpted by Michael Gaudioso, the image shows General Washington commanding his troops through the overnight crossing of the ice-choked Delaware River prior to the Battle of Trenton during the American Revolutionary War. Inscriptions include "UNITED STATES OF AMERICA," "E PLURIBUS UNUM," "CROSSING THE DELAWARE," and "QUARTER DOLLAR."

The reverse will be paired with John Flanagan’s portrait of President Washington. The original portrait was introduced on quarter obverses in 1932. Specifically, Public Law 110-456 mandates that the obverse revert to the same design containing the image of the President in use before the 50 State Quarters Program.

It really is a powerfully expressive illustration of his sense of purpose and command.

I thought an eagle had to be on the coin somewhere according to law.

That’s in the Mint Act of 1873. But the specific provision requiring Washington Crossing the Delaware to be on the coin after the conclusion of the National Parks series overrides that.

finally, a design that will last longer than a couple months.

Probably not. There’s a bill that has passed both houses of Congress for a famous woman (men are ineligible for some reason) from each state to appear on the reverse 2022-2025, then a US 250th in 2026 then youth sports in 2027 to 2029. It has passed each House in a slightly different form so it has to pass the House again and there’s less than a week left in the Congress, but these things seem to sneak through at the last minute.

That bill passed the House today and goes to Trump’s desk. No coin bill has been vetoed since 1954 so it probably goes through.

Isn’t it a bit redundant having Washington appearing on both the obverse and reverse? I don’t know about anyone else but I am burned out on all these commemorative quarters/multi yearly designs. I have given up on them. I just want to go back to a single regular design. For me, the Statehood/Territory quarters were find, but after that I was already for a regular single design but that never happened. I miss the days of a single lens proof set. Now they are bloated with stuff many have little to no interest in.

I thought we were supposed to get the 1999 NJ quarter reverse with modified wording? Either way, I’m glad that 22 years of five designs a year is finally over. Oh wow, I am so much older than I was when this all started…

The dollar is one thing, it’s one dollar. Value TBD. I request seth for their valuable input on such a touchy subject.

Will there be coins minted at west point of this coin as well?

Wondering about that too. Also curious if there will be “S” uncirculated ones sold separately. At least as Vachon said it will be a nice change from 5 a year, guess the mint and proof sets will each have 2 quarters in 2021, which will make packaging and displaying them easier. This almost seems like a run up to the 250th in 2026, though as Jim notes something else will be done then. I guess another set of special reverses on all denominations will be likely. Hope it is handled better than the 1975-6 sets which lay around for years.

I ordered two reverse proof coins today offered by the US mint.

+1 to all good comments

Nice back, but change the front too, such as a facing front view simular to the nickel.

We got a comedian

I would have liked the Obv. to have the original design used in the Commem Gold coin……this is a good design a shame no 5zpucks but don’t worry they will have them for the transexual wrestler issue in 2024

Beautiful reverse. A forward facing bust on the obverse would have been better like the nickel than that tired nearly 100 year old profile.

Love the design. will be highly collectible. Are there gonna be just 2 designs for 2021?

Have they said if there will be W-Mint Quarters for any of the 2021 quarters? Will they offer an S-Mint WCD Quarter in Uncirculated through the rolls and bags?

No W quarters in 2021 according to the Mint. I’m hearing April 5 for this quarter but there is nothing on the Mint site today (Feb. 25). Typical of how behind they are on such information there.

Would like to get a couple of uncirculated rolls. This will be a keeper with such limited time.

This is the first one I have seen of this. It hS alot of flaws on it. 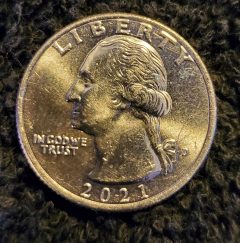 Bummer. I got two rolls of this quarter from my bank and they’re flawless.

Is there just the one crossing the Delaware coin being issued ?

I found a Denver’s and is beautiful but has ddo and ddr and cuds trying to find information on it!!