A likeness of Peratrovich appears on the new dollar’s reverse, along with a symbol of the Tlingit Raven moiety, of which she was a member. Reverse inscriptions read: UNITED STATES OF AMERICA, ELIZABETH PERATROVICH, $1, and ANTI-DISCRIMINATION LAW OF 1945.

Found on the dollar’s obverse (heads) is a portrait of Sacagawea as designed by sculptor Glenna Goodacre. The same image has appeared on dollar coins since the release of the 2000 Sacagawea golden dollar. Inscriptions around Sacagawea read: LIBERTY and IN GOD WE TRUST.

The year, mint mark, and E PLURIBUS UNUM are incused on the edge every dollar.

No mintage, product or household limits are in place.

Past Native American $1 Coins and Mintages

Authorized by Congress under Public Law 110-82, this latest dollar continues the Native American $1 Coin Program which dates back to 2009. Previous issues focused on the following themes:

Mintages have been trending lower with 2011 being the last year the coins were actually issued into circulation. (They are now produced solely for coin collectors.) The table below shows mintages since the series start in 2009.

*In January of each year, the U.S. Mint tends to strike dollar coins to the expected amounts needed for the entire year.

I thought the USmint was going to do a 24k gold commemorative of the the Sacagawea this year guess not did not hear any more about it??

I thought the same. Referencing an article from Coin World…https://www.coinworld.com/news/precious-metals/us-mint-eyes-gold-sacagawea-dollar-for-2020.html

Maybe they forgot to remember! Oh well, not my favorite coin but with a limited edition it might have sold well. Does anyone use the dollar coins? I give them to my grand baby and she grabs them to use when the ice cream man comes down the street! Yum! :>J

I’m waiting for the new Elizabeth Warren coin to come out with bats on the reverse!!!

one dollar coins Liberty is how much dollar U.S.A 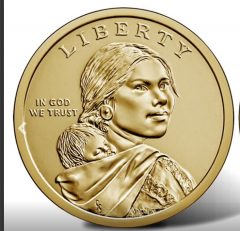