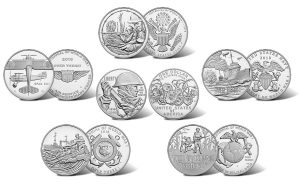 Less than 30 hours remain to order any of the five 2018 World War I Centennial Silver Medals.

Released in mid-January alongside WWI Silver Dollars, their sales deadline is 3:00 p.m. ET on Tuesday, Feb. 20. The United States Mint will not accept any new orders beyond that time. The companion silver dollars will remain on sale although at slightly higher prices.

The silver medals honor branches of the U.S. Armed Forces that were active in the First World War with designs emblematic of the Army, the Navy, the Air Service, the  Marines and the Coast Guard.

They were conceived by the U.S. Mint to support the WWI Centennial Silver Dollar Commemorative Coin Program. Each medal is paired with a proof silver dollar and sold as a distinct set. Collectors wanting all five medals need to buy the five sets, which boosts silver dollar totals. Surcharges of $10 are collected on the sale of each coin with proceeds, after associated costs, paid to the United States Foundation for the Commemoration of the World Wars to assist the World War I Centennial Commission in memorializing the centenary of the war.

The proof and uncirculated silver dollars are currently sold at respective introductory pricing of $51.95 and $48.95. Their regular prices are $5 higher, with that pricing also kicking in at 3:00 p.m. ET on Tuesday, Feb. 20.

Following the medal sales deadline, the U.S. Mint will have a handle on how many to make. The agency said it will begin fulfilling medal orders in late May.

Buy the dollars or sets from the U.S. Mint’s commemorate section right here.

Regarding the WWI Commemorative Silver Dollars and their attendant various military services silver medal sets, perhaps more reasonable and/or practical mintage limits would have made for a far more successful and satisfying outcome. I know this is coming from my 20/20 hindsight of the situation, but the question I ask is exactly how many times does the Mint have to persist in vastly overshooting the mark in production levels before it realizes the ever increasing implausibility of being able to meet its posted sales goals. As a result of this high degree of miscalculation the Mint effectively cheapens the product… Read more »

The mint is trying to outdo The Bradford Exchange.

ToppCatt – I fully agree with you. The majority of Modern coins are far from any form of sound investment.

I have my investment coins and also modern numismatic to enjoy the innovation and beauty of the design.

Chas Barber,
I believe it’s a little bit easier for me to not take the Mint’s inclinations, behavior and/or shenanigans all too seriously since I always buy only to collect and never to flip or as any kind of investment, but with that proviso in place comes the not so small print codicil that my purchases clearly are also, and by this I do mean across the board, exponentially smaller than yours in dollar value. Here’s to all styles of collecting, in whatever shape, manner or form!

Personally, I’m just finishing up my 5oz ATB set and will keep up with the commemorative unc dollars and silver proof sets until then. Plan on retiring in 2021 so then I’ll be done collecting – I think…

Mike Smith,
I don’t indulge in the 5oz. ATBs as they are over my expenditure limit (have been retired for eighteen years now), but the silver proof sets and commemorative uncirculated dollars are indeed right up my collecting alley. I do hope you are somehow able to continue adding to your collection after retirement. Perhaps you might even follow my lead of reducing the number (and hence the expense) of your acquisitions, the point being that it doesn’t ever have to be all or nothing. Happy collecting in any case!

Good point kind Sir. They do say that retirement is a time to stop saving and to start spending (what you have saved). But now looking at the 6 jam packed bankers boxes of coins I have collected over the years I’m thinking it is also a time to stop collecting and to start selling but one never knows. Maybe just a proof set each year will satisfy my addiction.

Old Collector I’ve been @ this since 1968- pulling a Coin World out of the trash! It is a major shakeout @ present & I hope not a generational change…virtual things v. reality- experience v. possessions…..I am almost @ liquidation or no more acquisition time, I remember helping my Uncle liquidate his stuff in the early ’90’s I bought all I want (GSA CC$, ’64 proof sets @ $5, silver & sent to mint & proof sets off…) still have them but @ some point we gotta move out these item$! I hope a new batch of Young COllectors awake…… Read more »

Greetings all – very sound advice to any new and young collector. I utilize 90 per cent of my collecting funds for nothing more than bullion – 10 per cent numismatic. The bullion is for retirement, and numismatic for the estate.

Bullion is a great supplementary revenue fund when retired, especially fractional gold and silver stacks. Never know when you are going to need a few extra bucks from time to time.

Chas Barber, If I thought back too hard on all the post-WWII European coinage, U.S. Military Occupation Notes and 90% silver U.S. coinage that passed through my hot little hands starting in the early fifties through my leaving for America in 1965, and me not having held on to a single example of any of it, I would cry. Back then it all symbolized no more to me than the price of a knockwurst, an amusement park ride, a P.X. cheeseburger, and a base movie with a popcorn to go with it. It’s all now expensive rare currency and valuable… Read more »

Mike Smith,
I agree that with retirement there pretty much comes an end to regular saving, but not necessarily by choice; rather, it can be the case that there is no longer any sufficient enough income stream to be socking money away from. As for spending, that comes naturally, as of course you have your expenses, but with that also comes a necessary caution regarding the stretching out of the retirement funds to last the balance of your lifetime.