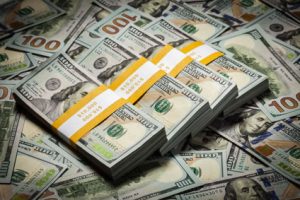 There were fewer banknotes produced in July than in any month since March, data from the agency that prints U.S. currency shows.

In percentage comparisons from the previous month, the BEP made 10.7% fewer banknotes accounting for a 2.6% reduction in total value. In other monthly differences, there were:

$50s were not made for a second month in a row while the number of $100s matched the previous month. Compared to the same month a year earlier, the number of notes climbed 3.4% while their combined value fell 32.9% as a result of fewer $100s.

The BEP printed 3.52 million star notes, split across $1s and $5s. Star notes are replacements for misprinted or damaged notes and for certain serial numbers like 000 000 000. They have serial numbers that end with a star “*” designation, and are also so indicated by quantities in the images above. Money collectors usually find star notes more desirable since they can be harder to find.

According to data from the Federal Reserve, there was approximately $1.46 trillion in circulation as of June 1, 2016, of which $1.4 trillion was in Federal Reserve notes.