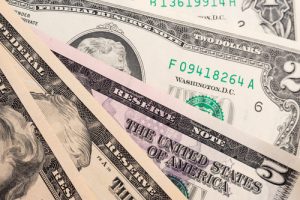 U.S. paper money production slowed a bit in August compared to July but the number of larger bills rose sharply, according to monthly data published atypically late (on Oct. 6) by the agency responsible for printing American currency.

The Bureau of Engraving and Printing (BEP) produced 557.05 million banknotes last month for a combined value of more than $16.1 billion. By comparison, July levels reached 566.4 million notes worth over $13.1 billion.

In percentage breakdowns, August saw 1.7% fewer notes than July while their combined value was 22.2% higher. In other month-over-month comparisons, there were:

The BEP produced 250,000 in $1 star notes. Star notes are replacements for misprinted or damaged notes and for certain serial numbers like 000 000 000. They have serial numbers that end with a star "*" designation, and are also so indicated by quantities in the images above. Money collectors usually find star notes more desirable since they are harder to find.

Even though we have a new Secretary of the Treasury & a new Treasurer of the U.S., it takes awhile for the new signatures to be engraved & plates made at the BEP for mass production of new FRNs. Plus, they need to use up most of the inventory of “old” series notes before putting new series into circulation. It has been less than 6 months since Mnuchin & Carranza took office.