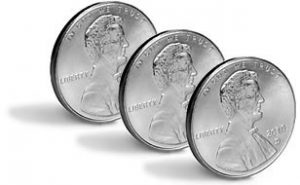 Today we bring you several newly introduced bills on coins that need little description, with previous versions talked about aplenty in having made unsuccessful rounds in prior sessions of Congress.

One of them seems poised for passage while the others have longer roads to travel and could again turn into dead ends.

H.R.516, Cents and Sensibility Act: This legislation seeks to immediately change the existing compositions of one-cent, five-cent, dime, and quarter-dollar coins to a composition of primarily U.S. steel. Similar legislation has been presented in concurrent sessions of Congress since 2011.

"This legislation is a common-sense solution to lower the cost of minting our coins," said Congressman Steve Stivers, who introduced H.R.516. "Not only will it cost less to produce, but it will also allow us to use an American resource – steel – that can be manufactured right here in our backyard."

S.301: The text of this bill is yet to be published. S.301 proposes 2017 commemorative coins to celebrate the centennial founding of Boys Town, according to its summary information. Legislation with the same purpose passed in the House and Senate late last year but Congress left town before sending it up to the President’s desk. It does appear that this bill has a solid chance of becoming law.

H.R.602 & S.902: Again, only summary information is available for these two pieces of legislation but they’re familiar with their call for commemorative coins in celebration of the Pro Football Hall of Fame. We’ve seen similar attempts in 2012 and 2013. The most recent included language for 2017 gold, silver and clad coins that had surcharges to help finance the construction of a new building and renovation of existing Pro Football Hall of Fame facilities.

By their own figures, they are “making” money, figuratively and literally. Here’s a solution. Make less pennies, fewer nickles, more dimes and more quarters. OK, I’m ready to assume my post at the OMB! 🙂

It is absurd to change the composition of the dime, quarter, and presumably half dollar to a steel-based composition when their production is already so profitable. Making 6.1¢ on a dime and 16¢ on a quarter isn’t enough?! How cheap do our already near-worthless coins need to be? Businesses would kill for profit margins like that. I don’t even know why the cost of shipping and manufacturing the coin is included in the justification. If the mint ceases making seigniorage profits, then would they not get appropriations annually from Congress like they used to? Just the metal content is all… Read more »

Looking at the mints 2014 circulating coin figures, 8+ billion pennies were made at a cost of $56 million (8B*.7 cents) over face value and $37 million (1.2B*3.1 cents) over face value for nickels. The mint made $140 million on dimes and $250+ million on quarters. The mint is making a profit on its coin business without having to change the metallic composition of any of its coins. However, changing the composition of a coin that is practically valueless rather than eliminating that coin’s production altogether seems to be a nearsighted view to me. Other countries have eliminated the useless… Read more »

It’s political. Congresspeople want to keep presidents from their states on coins. And I suppose dropping the money would admit that inflation had occurred over time. (Some of may remember how the Anthony dollar was called a “Carter quarter.”) Changing the composition of nickels makes sense, especially if copper prices rise significantly. But given the pace at which things seem to move in Washington I don’t see that happening soon. (Though I suppose one could be surprised–a secret plan to withdraw, melt, and replace them is possible, if unlikely.)

40% of all US transactions and 85% of all world transactions are still done in hard currency. If you are wondering why the US continues to produce so many coins and paper bills it is due their continued heavy use. This is Good news for coin & bill collectors world wide!

While steel coins may be more durable in circulation, the steel blanks (rounds) used to produce the coins would wear out the dies much more quickly (then the current & prior materials that have been used).

First you do everything to boost coin collecting interest in American coinage, and now that you’re charging way over the value of mint coins you’re looking to pull the rug out and hope that collectors continue to buy, ” US Steel ” ? It’s not patriotic to to deceive the American public by throwing the American flag in their face to conceal the deception.

For those who complain about ‘the mint making all those coins’, the reality is that they produce coinage to meet demand. The demand comes from the Federal Reserve System, who in turn get there requirements from the banks in the United States. Where we run into problems in over-production is when Congress mandates that certain coins will be produced regardless of demand (i.e. the Golden Dollars). While it may be true that each denomination does not cost less to make relative to its face value, in the aggregate the mint generates more coinage value than the cost incurred to produce… Read more »

One reason so many pennies are produced is the copper -plated zinc coins tend to lose the plating after a while and the exposed zinc doesn’t hold up as well as the copper/bronze coins of old did.