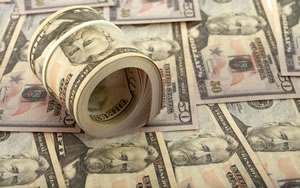 The United States government printed more than 1 billion banknotes in a month for the first time in over a year, data from the agency responsible for producing U.S. currency shows.

The monthly amount was the most since nearly 1.2 billion notes were printed in September 2013. The combined value was also the highest since that month when it soared to over $65.7 billion — lifted mostly by a large amount of $100s.

In month-over-month comparisons, October saw 116.2% more notes than in September and their combined value was 255.7% higher. By denomination, there were:

In October, the BEP printed 256,000 $100 star notes. These are indicated by the "*" designator in the production chart directly above. Star notes are replacements for misprinted notes or certain serial numbers, like 000 000 000. Money collectors find them more desirable since they are rarer, making them difficult to find.

As a perspective, the BEP in Fiscal Year 2013 manufactured about 26 million banknotes a day with a face value of about $1.3 billion. Approximately 6.6 billion notes went out at an average cost of 10 cents per banknote. The BEP notes that more than 90% of paper notes printed each year are to replace those already in, or taken out of circulation.

Consider buying some silver / gold as there is little backing all these new banknotes.

If you believe that 90% are replacements then I have a bridge in Arizona to sell you. And this doesn’t count the non-currency loans, grants, and other transactions out there each month. Is the economy actually growing by this amount or is the county using funny money to cover obligations to veterans and seniors it has no intention of ever making good on.