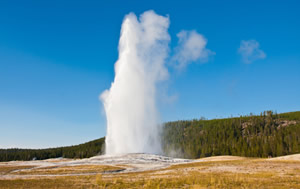 New coins commemorating the 100th anniversary of the National Park Service are one step closer to reality. Legislation authorizing the coins strongly passed the U.S. House of Representatives on Tuesday, April 29, 2014 with 403 votes for them, 13 votes against and 15 no votes.

The bill is entitled the National Park Service 100th Anniversary Commemorative Coin Act and numbered H.R. 627. If it passes in the U.S. Senate and gets signed by the president, the United States Mint in calendar year 2016 would produce and sell up to:

These commemorative coins would be struck in collector proof and uncirculated qualities with designs emblematic of the National Park Service’s centennial. Established in 1916, the National Park Service or NPS (www.nps.gov) is a bureau of the Department of the Interior and is tasked with managing and safeguarding more than 400 national parks throughout the United States and its territories.

"Many of my favorite memories are with my family enjoying the beauty of our national parks," said Paulsen in a news statement following the House passage of the bill. "In Minnesota, we’re lucky to have places like Voyageurs National Park in northern Minnesota and the Mississippi River and Recreation Area in the heart of the Twin Cities. We need to ensure the continued preservation and protection of these great natural resources so that our children and grandchildren will have the same opportunity to enjoy our country’s wonderful history and scenery."

Many Americans are familiar with the NPS, having visited national parks around the country and also beginning to see more of the national park quarters in circulation. The U.S. Mint introduced its America the Beautiful Quarters® Program in 2010 which, as directed by Public Law 110-456, commemorates specific national parks and national sites throughout the U.S. and its territories. Twenty-two of the planned 56 have already been issued with the most recent quarter honoring Shenandoah National Park in Virginia.

H.R. 627 would commemorate the NPS, not any specific national location like the quarters. Specifications and inscriptions on the National Park Service coins would be typical of other modern commemoratives, excluding this year’s latest issues which sport curved shapes and honor the 75th or diamond anniversary of the National Baseball Hall of Fame.

H.R. 627, as is also typical of coin legislation, mandates surcharges for sales of each coin. If the coins make a profit, surcharge amounts would include $35 for each $5 gold coin, $10 per silver dollar, and $5 for each clad half-dollar. Funds collected would go to the National Park Foundation for projects and programs that:

"Help preserve and protect resources under the stewardship of the National Park Service and promote public enjoyment and appreciation of those resources."

H.R. 627 does prohibit the use of these funds for land acquisitions.

A similar bill, S.1158, resides in the U.S. Senate and has been referred to the Committee on Banking, Housing, and Urban Affairs.

Embedded below is a video of Rep. Paulsen’s floor speech on the National Park Service 100th Anniversary Commemorative Coin Act and why he introduced it.

More “surcharges” to be dropped down the magic hole of waste! Stop the insanity! “$6,720,360.00 in surcharges will go to the National Baseball Hall of Fame to help fund its operations.” Is someone kidding me? Has anyone been to the Baseball Hall of Fame? Notice the ticket prices and the cost of souvenirs? Seen the crowds? They make a lot of money. Stop it!

Vic – Surcharges are a form of taxation. But one we agree to when we purchase coins with a “surcharge”. Similar to when a consumer buys gas, tires, a land phone line, cigarettes and hard liquor. But the government calls these donations “Excise Taxes”.

Seeing the popularity of the atb coins, they thought, ‘Why not ride the wave (or geyser) of popularity and profit?’

Folks, these are politicians involved in these decisions.

This don’t interest me. All I’m waiting on is the J F Kennedy gold coin.

I don’t have a problem with the sur charges if you don’t like them then don’t buy the coins, it’s as easy as that.
If you had a business wouldn’t you want to make money?

Scott – I don’t think you get it. The surcharges don’t go to the Mint. They are windfalls to the organizations of the coin subject.
National Parks?… I assumed some of the blood that annually squeeze out of this turnip went to maintain the National Parks.
Baseball Hall of Fame?… Admission fees aside, perhaps the major league owners could send a nickel to Cooperstown from the ridiculous ticket prices instead.

Here is what I gather:
Most of us agree that organizations affiliated with high dollar companies, i.e. football, baseball, hockey, etc. have more that enough money to support their associated museums.

However,
National Parks are more reasonably priced and offer Free Entry to Disabled patrons and their families. So even though these are funded by taxes they are a very small percentage of the total and perhaps this is one exception that is more deserving of additional funding.

Agreed, Ronnie. National Parks are among the most poorly-funded government operations. I forget where I saw the figure (probably while visiting a National Park) but the per-capita tax “burden” of the NPS is on the order of pennies per year. The NPS cares for national treasures ranging from the Grand Canyon to Independence Hall so IMO we get a pretty good return on those pennies.