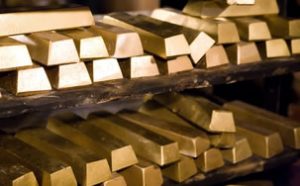 Gold prices advanced Friday for the first time in five sessions, but the yellow metal still tripped on the week after jumping last week to end at a six-month high.

Gold for April delivery climbed $5.50, or 0.4%, to settle at $1,336 an ounce on the Comex division of the New York Mercantile Exchange. Gold prices declined $43, or 3.1%, from a week ago, pressured by bearish Fed news and easing safe-haven demand.

"Gold has had an interesting ride as it pinballs between Crimea fears and Fed expectations," MarketWatch quoted Jonathan Citrin, founder and executive chairman of CitrinGroup.

Participants in the latest Kitco News Gold Survey have mixed expectations for the coming days after most missed the mark by forecasting gains this week.

In the new survey, "out of 33 participants, 18 responded this week. Six see prices up, while eight see prices down and four see prices trading sideways or neutral," Kitco reported.

Silver extended its losing streak to five sessions Friday with May silver off 12 cents, or 0.6%, to $20.31 an ounce. Silver prices tumbled on the week by 5.2%, cutting its yearly gain by more than half to 4.9%.

Like gold, PGM futures advanced on Friday. They split for the week. In the breakdowns:

Both remain higher on the year so far with gains of 4.5% for platinum and 9.9% for palladium.

London bullion fixings advanced Friday but dropped on the week. When comparing the London fix prices from Thursday PM to Friday PM:

U.S. Mint bullion sales were solid on the week with demand for gold coins up and silver coins nearly on par with their robust performance last week. In week-over-week bullion sales comparisons:

Below is a sales breakdown across U.S. Mint bullion products with columns offering the number of bullion coins sold on Friday, last week, this week, last month, the month-to-date, and the year-to-date.