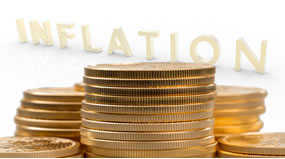 Gold and silver futures ended lower for the first time in three sessions after a report showed flat U.S. inflation and ahead of the Fed’s monetary policy statement.

Earlier Tuesday, a report from the U.S. Labor Department showed that inflation was flat in November. Historically, gold has been purchased as hedge against inflation.

"Metals markets need to see some inflation before they can rally because they’ve lost their appeal as an inflation hedge," Chris Gaffney, the senior market strategist at EverBank Wealth Management in St. Louis, said in a telephone interview according to Bloomberg News. "That’s taken a lot of buyers out of the market."

Also reported by the Labor Department, inflation increased 1.2% over the past 12 months compared to 1% previously. But core annual inflation, which strips out volatile food and energy prices, rose 1.7% for a third straight month. That remains below the 2% Fed target rate, offering policy-makers a reason to go easy on or even delay tapering. If there is a delay, that could spark a short term rally for gold and silver as more investors have been expecting some level of tapering.

"While the prospect of an immediate taper seems to be diminishing for now, it seems only inevitable that the Fed will act sooner rather than later, and the longer-term investors are still being seen to reduce their exposure to gold as a result," Reuters quoted a trader at TD Securities’ precious metals desk.

Sales totals for United States Mint bullion coins were unchanged for a second consecutive day, according to figures on the bureau’s website. Listed below are U.S. Mint bullion sales for the month through Dec. 17 and the year-to-date.

No inflation? Have you been to the store and saw meat prices? Have you bought a box of cereal only to pay the same price but it is smaller.

These numbers from the government are lies.