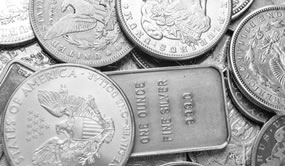 Trading action on Friday resulted in very modest precious metals changes but the damage had already been handed out earlier with gold dropping 3.4% on the week.

Gold for December delivery inched up 50 cents to settle at $1,244.10 an ounce on the Comex division of the New York Mercantile Exchange. That snapped gold’s two-session losing streak and brought prices up from a more than four-month low. Investors for much of the week focused on riskier bets.

"The perception that the stock-market rally will continue and is sustainable through year’s end and perhaps into [the first quarter] of 2014 is creating the exodus out of gold, causing this price decline," MarketWatch quoted John Person, president of NationalFutures.com.

Gold’s weekly loss goes down as the biggest since prices fell 5.6% in the week that ended Sept. 13, MarketWatch noted.

Gold surveys from last week either leaned or had a clear majority of participants expecting higher prices for this week. New surveys weigh bearish.

"In the Kitco News Gold Survey, out of 34 participants, 25 responded this week. Of these, six see prices up, while 14 see prices down and five see prices sideways or are neutral," reports Kitco.

"For participants who see weaker prices, they said the technical charts and fundamental news for the market remains bearish… Yet a few other participants said while they think that gold might have some further downside, they don’t expect selling to intensify next week, especially after the market fell sharply this week."

Bloomberg News reports its survey is the most bearish since June with 19 participants forecasting lower gold prices compared to 9 who were bullish and 3 who were neutral.

U.S. markets will be closed Thursday for the Thanksgiving holiday but will re-open Friday.

Silver extended its declining streak to five sessions, leading all precious metals with its 4.2% weekly decline. On Friday, silver for December delivery shed 7.2 cents, or 0.4%, to finish at $19.86 an ounce.

In rounding out the precious metals futures complex on Friday:

The following grid summarizes precious metals futures for the month-to-date, the completed quarters in 2013 and the year-to-date.

The following grid summarizes London precious metals fixings for the month-to-date, the completed quarters in 2013 and the year-to-date.

U.S. Mint bullion sales for the week, for the month through Nov. 22, and the year-to-date are listed below.

Melt values for silver coins are sharply lower in November, adding to already steep losses on the year. The grid below offers current melt values of older circulating U.S. coins that were produced with 90% silver. These coins, at least those that have little to no numismatic worth because they are too common or too worn, are the ones often sought for their silver values.

The above melt values are derived using London fix silver prices from the end of 2012, end of October and on Nov. 22.

Since silver is mostly a byproduct of copper mining, the need for mining copper will drop once hydrogen-nickel fusion goes into production early next year. That process generates energy at extremely cheap prices and transforms nickel into copper. People who want silver are going to have to pay to mine silver at which time it will go back to the 16:1 silver gold ratio that it was before.