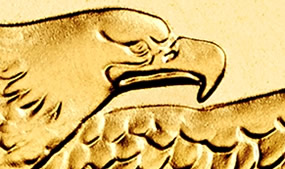 Gold was little changed ahead of the Fed policy meeting this week, though prices did settle a tad off from the five-week high notched on Friday.

Gold prices for December delivery slipped 30 cents to $1,352.20 an ounce on the Comex division of the New York Mercantile Exchange. The loss was the first in three sessions. Trading volume was softer than typical in starting a new week as gold prices ranged from a low of $1,346.10 to a high of $1,361.80.

"Quanticipation is back, and gold says the Fed won’t taper QE or change anything else on Wednesday," MarketWatch quoted Adrian Ash, head of research at BullionVault. "That might mean we get a dip after the announcement itself."

Fed policy makers begin their two-day meeting on Tuesday with the FOMC statement published on Wednesday at 2 p.m. ET.

The three metals advanced last week with gains of 3.3% for silver, 1.2% for platinum and 1% for palladium.

The rest of the ATB 5 ounce coins will follow soon, going off sale. Expect the Proof Gold to suddenly disappear from sales. This is an off year, seemingly. The mint will act to preserve collectibility. All, of course, IMHO.