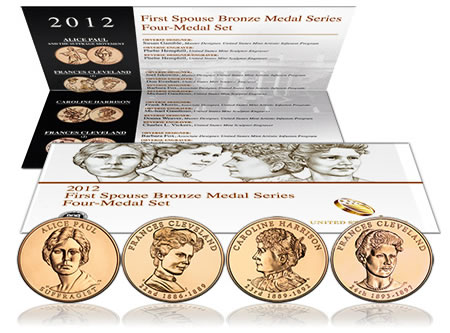 On Thursday, December 20, 2012, the United States Mint released the 2012 First Spouse Bronze Four-Medal Set along with the last of the other related, but separate, First Spouse coin products. Its price is $16.95, a savings of $3 compared to 2011’s annual set.

Honored in the four-medal set are Alice Paul, Frances Cleveland, and Caroline Harrison. There are two different bronze medals for Cleveland because her husband served two non-consecutive terms as President.

Within the four-medal set are the same 1 and 5/16-inch bronze medals found in the corresponding four 2012 Presidential $1 Coin & First Spouse Medal Sets that the U.S. Mint sells separately for $9.95 each.

The set’s packaging is cleanly designed. Mylar® plastic holds the four medals in place on a custom folded card with product information inside a special envelope.

Artwork shown on the medals bear a likeness to the designs found on companion 2012 First Spouse Gold Coins. The Philadelphia Mint strikes them, although no mint marks are present.

Obverses show a portrait of the honored lady while reverses portray a scene from her life. Design details for the bronze medals follow, along with links to CoinNews.net articles about each First Spouse Gold Coins release this year.

Alice Paul and the Suffrage Movement

Alice Paul is honored with companion Chester Arthur Presidential $1 Coins, although she was not a First Spouse. Arthur was widowed before taking office, so lawmakers chose to celebrate Alice Paul and the Suffrage Movement.

On the reverse of the medal, a suffrage parade participant wears a sash bearing "Votes for Women." She holds the flag over her shoulder while marching. United States Mint Sculptor-Engraver Phebe Hemphill designed and executed it.

Married to President Benjamin Harrison, Caroline Harrison was First Lady between 1889 and 1892. The design on the reverse represents her love of flowers. It shows a close-up depiction of an orchid and paint brushes. United States Mint AIP Master Designer Donna Weaver designed the image, and United States Mint Sculptor-Engraver Charles Vickers engraved it.

The reverse of the second strike honoring First Lady Frances Cleveland depicts an event emblematic of her popularity with the public, showing her standing next to the President and waving to a crowd. United States Mint Sculptor-Engraver Joseph Menna designed and sculpted it.

Bronze medals in this set are not offered individually this year as similar, earlier strikes in the program had been available in the past.

There are no household ordering limits for the set. Shipping, the U.S. Mint indicates, will take between one and two weeks.