Well, here we are, ready to toss another batch of calendar pages out the window (if the ones in your office do open). 2011 was not a kind year to commodities, that much will be noted in the record books. It was not a very friendly year for investors in general, and many of them are closing it out in a deeper state of confusion and apprehension than they started it with. The operative word for 2011 would now appear to have been ‘volatility-plus’ and the ‘plus’ in this case meant plenty of pain for investors who made ill-timed bets.

The commodities’ complex as measured by the S&P GSCI Total Return Index suffered its first annual loss since 2008 this year as former star-performers cotton, copper, and cocoa turned sour and as the European turmoil and the actively slowing Chinese economy all conspired to throw several monkey wrenches into the markets’ machinery. You want to talk losses? How about a 37% surprise to the downside in cotton (a commodity which Indian cotton mills had at one point refused to buy more of, on account of silly prices)? How about a 30% ouch in cocoa (turns out that it is bitter, after all)? Or, how about a 23% reverse double-twist in the LME’s six industrial metals (nickel, zinc, and tin among them)?

After logging six losing sessions that neared 5% and touching important must-not-break support near $1,520 an ounce, gold prices recovered as the final trading session of a quite turbulent year got underway this morning. Spot New York indications showed gold ahead by about $20 at $1,565 the ounce and silver up by only about 22 cents at one penny under the $28 mark. Platinum advanced $16 to touch $1,383 while palladium gained $10 to rise to the $639 level. Rhodium was bid at $1,350 per ounce.

Some observers have linked the most recent melt-down in precious metals to the upcoming change in Japanese tax laws. Never mind that historically price-conscious and better-than-decent-market-timing Japanese investors have been selling gold bullion into price strength for several years now; at this juncture, they want to be out and/or want to be in smaller forms of gold (coins) as they face the prospect of having to report any and all transactions with dealers in excess of $25.700 come January 1st.

Over in India, gloomy jewellery retailers are resorting to using less gold in the baubles they manufacture. Price, price, price (as in: too high) is the culprit. Scrap sales are surging, while sales of decorative gold are languishing. If you wish to see what record gold prices have done to the global demand for jewellery (normally, the pillar of yellow metal demand at about 66%) look no further than this little chart. The inverse price-demand correlation is hard to miss, no matter what spin anyone tries to put on gold stories from India, or elsewhere. 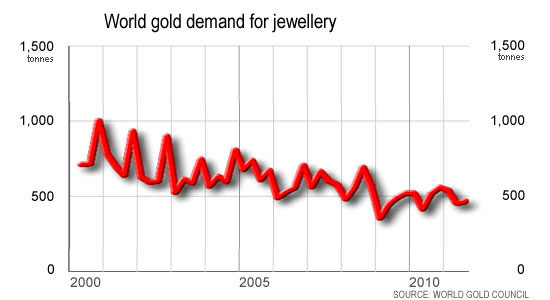 Continuing on the news track we have already (sadly) witnessed several times this year, yet another bullion firm has come under legal fire. First American Monetary Consultants — a Memphis TN firm headed by one "Dr." Larry Bates-that has been urging Christians to pile into gold and silver as a hedge against global chaos has been sued for non-delivery of precious metals by investors. The good doctor has been advising his faithful flock to not only buy oodles of silver, but to…consume it (literally) as well. Well, at least you will greet The End of Times with a clean-as-a-whistle…colon as well as conscience.

Most of the news this morning was focused on year-end summaries and retrospectives rather than coverage of any impactful news stories (which, in all fairness, were largely absent). China’s manufacturing activity did show a poorer-than-expected performance this month, according to a fresh HSBC survey. There was a "modest deterioration in business conditions" reported. The official PMI report from the government is on tap next week. Keep an eye or two on that telling report before placing your first 2012-dated bets.

Over in Europe, taking a page from Italy’s budget book, Spain proposed temporarily raising taxes on income, savings, and high-end homes in an attempt to mitigate at least part of its deficits. Economic metrics just released show Brazil’s economy contracting in the third quarter and industrial activity in India and in China slowing down. Such conditions will weigh heavily on the minds of commodity speculators as 2012 soon gets underway.

And now, the 2011 tally as computed based on the data available on the Kitco charts and data pages. Gold’s first PM Fix this year came in at $1,388.50 the ounce. The last available PM Fix was $1,531 per ounce, which would result in a 10.25% gain on the year. That is a still respectable figure but it must stand in comparison to the 25% and 24% leaps in value that were achieved in 2010 and in 2009, respectively. As well, it is worth noting that the yellow metal has not experienced a quarterly decline since September of 2008.

The roughly 26% ($400) decline from the September highs is also not going unnoticed among small retail investors. A conversation with a major American bullion dealer yesterday brought into focus the sheer panic that such buyers are experiencing; especially those who piled into silver at $50 this spring and into gold above $1,850 during August and early September.

That gold dealer’s phones are ringing with a frequency not normally associated with the quiet in-between-holidays week and probing questions are being posed about the state of gold’s health and future prospects. Albeit the yellow metal still appears set to close out the year with a double-digit percentage gain, the fourth quarter losses it incurred and the extreme rise in its volatility for the better part of the second half of 2011 have engendered some major apprehensions among folks who thought they were betting on a "sure thing" even as caution flags were out in abundance at the time.

The GLD ETF has also taken out meaningful support levels at $150 and it is now back to price levels last seen back in June. The index is now well below its 50 and 200-day moving averages and has broken its bullish support line — the demarcation line between bull and bear markets- according to John Nyaradi’s Wallstreetsectorselector.com in his "Bears Bite Gold Market" analysis. Here is that image, for consideration, courtesy of stockcharts.com:

While spot gold bullion could now rebound to near $1,590 after the recent price carnage, the advent of a so-called "death cross" whereby the 20-day MA crossed under the 200-day MA has some analysts looking for the $1,425 level in the not-so-distant future. One observer (John Townsend) opines that the odds of gold having finished its decline are zero whilst the odds of a visit around that $1,400 area are from 80 to 95%.

If we look at silver’s first London Fix of $30.67 and yesterday’s $26.16 Fix the 17% loss would appear pretty bad in and of its own. Certainly, when compared to the 78% gain that the white metal achieved in 2010, or the 54% gain achieved in 2009, that loss figure does look awful. However, the full-year metric does not take into account the 45% plummet that silver has suffered since April 25 when $50 per ounce was briefly touched.

Platinum did not have a very good year either, if we base the calculations on the same London Fix prices. The noble metal opened the year at $1,753 but finished it at $1,354 per ounce for a near 30% loss. Palladium fared a bit better, but based on the Fixing quotes that showed $784 as the initial 2011 level and the $630 one as the closing for the year, its decline is on the order of 24%.

The wild swings in commodities and in precious metals during this stormy market year certainly afforded plenty of trading opportunities for short-term players. Yes, you could have made 20% in palladium had you bought it at $700 in March just after the Sendai quake and sold it in either July or August at $842 the ounce. Yes, more than 11% in profits could have been booked by scoping up platinum at $1,697 after the Japanese event and selling it at the August peak of $1,887.

On the other hand, a courageous buyer of $27 silver in late January would have walked away with a $23 profit per ounce if the position had been cashed out just three months later. The luckiest (in terms of timing) gold players could have swept 44% in profitable chips off the table had they played their cards right by betting on January 28 and leaving the gaming room on September 5th.

This is not to say that one might not have been able to make some dollars on their dollars by carefully picking and playing certain stocks. McDonald’s comes to mind, giving its investors a 30% profit for the year. Yummy. T-Bond buyers were rewarded with a 9.66% return on the year- a figure that handily beat US stocks. However, the big surprise of 2011 and the best among the best in asset returns was…drum roll…the 30-year Treasury bond.

Talk about safe-havens: the much-maligned Treasurys asset class turned out to be the one shelter that everyone who sought them out offered a seemingly impossible (and much better than gold’s) return: 35%. Guess it depends on one’s definition of a safe-haven. Not that the greenback was a slouch, either. The fiat currency to end all fiat currencies in a spectacular fireball did not manage to explode in 2011 either; it actually managed a near 2% climb on the trade-weighted index and it gained ground against most of its major competitors (save the yen) this year.

HAVE A HAPPY, HEALTHY, and (hopefully) PROSPEROUS NEW YEAR!

A million thanks to the more than 33.000 daily readers these articles have been enjoying. Your loyalty is most sincerely appreciated.