The "risk-on" switch was once again activated this morning and the euro as well as global equities took off towards higher levels. European equities actually hit a five-week high as buyers drank the elixir of optimism and dove headlong into the markets.

All of this took place despite the Slovak parliament’s rejection of an enhanced EFSF. Thus, the same excuses that were called into duty to explain why markets fell on Tuesday were swiftly reshaped to suit the mood of the day and were employed to explain today’s gains. "Gold Falls as European Crisis Shows Signs of Worsening" was followed by "Gold Rises on Renewed European Debt Concerns." Got that? Good. Now go invest.

At the end of the day, such "retrofitting" of the European puzzle’s story pieces shows that not only are global investors confused to the max about what to do (and who can blame them?) but that the pundits as well as the media do not have any better grasp of the situation either. Actually, it is becoming slightly comical to read certain headlines of late. But, we will leave that to the "Daily Show" to bring to you later tonight.

However, surely, that nightly show will have its hands full with other, more "side-splitting" quotes, such as the ones uttered by would-be candidate Gingrich at last night’s GOP runners’ field debate. He said that Messrs. Bernanke and Frank (Barney) should be fired and jailed, respectively. Or, the writers could also take apart Rick Perry’s assertion that American poverty levels are rising because Mr. Obama is a "job-killer." Or, the statement that America fought the revolution against the crown in the… 16th century. Take your pick, the "gems" never stop coming.

The Slovak vote that did not approve the rescue fund’s augmented shape also brought down the government of the country. Meanwhile, investors figure that the incoming government will get its act together and go along with the enhancement plan. As well, the continuing efforts by the Franco-German team to bolster Europe’s banking system and see to it that whatever happens to Greece unfolds in an orderly fashion, are serving to support investor optimism that the EU will live to see another year.

Rising optimism equals taking larger risks. Taking more risk equals selling some of the dollars that were piled up and being sat upon with emperor penguin-like vigilance by highly worried investors. We alluded in yesterday’s article and video clip to the fact that massive dollar-long positions were likely to be trimmed in the view of certain currency market watchers. The greenback fell 0.95% on the trade-weighted index this morning. The euro made it to the 1.377 level against it this morning. Did anything material change in the Old World? Not the last time we checked.

What we did check was the Kitco Live Spot price indicators however. They showed gold opening with a gain of $25 at $1,688 the ounce and silver started the midweek session off with a three-quarter dollar rise to the $32.89 level. The big gainer on the day was platinum, which showed a $30 lift to $1,544 while palladium added $9 and climbed to the $611 mark. It is being anticipated that industrial users of platinum could make an appearance on the market scene as buyers if the noble metal stages a comeback from current levels. The precious metal recently dipped as low as the $1,480 area while its sister metal palladium visited the $565 level.

The early gains in the metals were later tempered somewhat and by the noon hour gold was ahead by only $13 and trading nearer the $1,675 level after a test of the $1,685- $1,690 area. Crude oil actually turned negative by midday and traded nearer to $85.50 per barrel as the International Energy Agency cut its demand estimates for the commodity.

The dollar also stabilized on the index near the 77-mark. The midday trade was focusing on the release of a detailed, and so-called "fully coordinated" EC plan to strengthen the Old World’s banking system. At the same time the EC also called for "decisive action" on Greece, part of which action is to include the payment of a sixth installment of aid funds.

With gold prices being what they have been recently, it turns out (no surprise) that they have diverted the attention of certain "investors" away from certain other… endeavors. Rebels, guerillas, gangs, and other illegal groups have abandoned the production of and trafficking in "Colombian marching powder" in favor of illegal gold mining and distribution. Well, at least you do not have to ingest a cocaine-filled balloon any longer or load your submarine with kilos of "candy cane." You can just get a nice bid on a shiny kilo of… yellow metal from your friendly refiner/bullion dealer. As for getting high on gold, well, there are plenty of investors willing to get addicted to that as well, as you already know.

Unfortunately, there is one other dark aspect of gold production — that found in a country not that far from Colombia-that rarely makes it to the front pages of the financial press. Once again, the principal culprit in the phenomenon is the price tag associated with an ounce of gold. What price gold? A price some say is incalculable in its potential effects.

There has been a direct correlation between the rise in gold’s value and the spreading of a "dead zone" in Peru’s rainforest. Some estimates place the area that has become deforested by gold mining in Peru as high as 2,000 hectares (20 million square meters or almost 5,000 acres) per annum in the past five years. That’s prime Amazonian rainforest that has been replaced by something resembling a moonscape, which appears like this from the air: 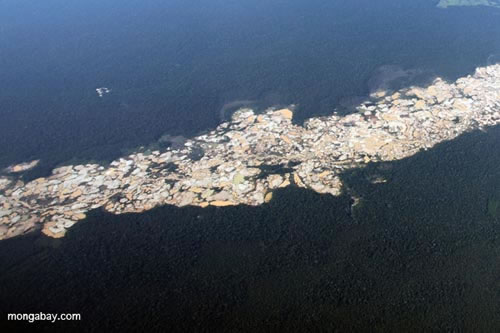