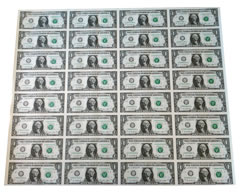 Each uncut currency sheet includes crisp, uncirculated $1 notes of varying quantities that range in price from $16.25 to $61.00. The Series 2009 $1 notes have a Federal Reserve Bank designation of Philadelphia.

Uncut Currency Sheets are "hot off the press" and are a "must-have in any collection and make wonderful gifts for those ‘hard to buy for’ people on your holiday shopping list," the BEP states on its website.

The BEP announced in July that it was raising uncut currency sheet prices on August 22. The $1 products climbed between $0.75 for a 4 subject sheet and $6.00 for a 32 subject sheet.

Series 2009 $1 Uncut Currency Sheets may be ordered through the BEP page:

The first $1 notes, called "Legal Tenders," were issued in 1862 while the first $1 Federal Reserve Notes were introduced in 1963. The BEP indicates that the life span of the typical dollar bill is about 42 months, and that the smallest denomination makes up about 45 percent of its currency production.