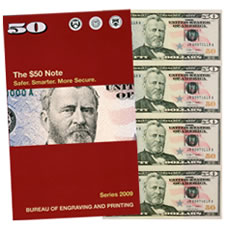 Each uncut currency sheet includes crisp, uncirculated $50 notes of varying quantities that range in price from $240.00 to $900.00. The $50 notes have a Federal Reserve Bank designation of New York.

Uncut Currency Sheets are "hot off the press" and are a " must-have in any collection and make wonderful gifts for those ‘hard to buy for’ people on your holiday shopping list," the BEP states on its website.

The Bureau of Engraving and Printing also offers 16 subject acrylic frames to hold and hang uncut currency sheets. The frame enables viewing of both sides of the notes and is listed for $32.00