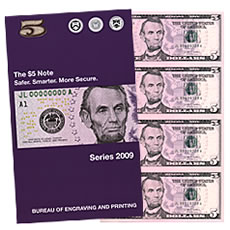 Each uncut currency sheet includes crisp, uncirculated $5 notes of varying quantities that range in price from $37.00 to $199.00. The $5 notes have a Federal Reserve Bank designation of San Francisco.

Uncut Currency Sheets are “hot off the press” and are a “must-have in any collection and make wonderful gifts for those ‘hard to buy for’ people on your holiday shopping list,” the BEP states on its website.

Series 2009 $5 Uncut Currency Sheets may be ordered through the BEP page:

The $5 Note was redesigned in 2007 and entered circulation on March 13, 2008. The updated look incorporated many new security features to deter counterfeiters. Some of the features included the light purple color in the the center of the bill, two watermarks, the enlarged numeral 5, and additional symbols of freedom.