The biggest decline in gold since 1980 (and not many readers may personally recall that fateful year) unfolded in recent hours and the rout extended into the morning hours on Thursday as the yellow metal fell yet another nearly $50 to touch the $1,702 mark overseas.

On Wednesday, spot gold fell by another $77.90 per ounce to finish the stormy day at $1,751.30 the ounce. Silver lost $2.11 to end at $39.69. Spot gold dealings opened with pared losses in New York this morning as some of the selling let up momentarily.

Quotes indicated bullion on the bid-side at $1,727.00 the ounce but the market was far from exhibiting signs that the anxiety that has developed since Tuesday has even remotely dissipated. The $1,650 to $1,680 area still presents itself as a target for the bears to try to test but some corrective bounce at this juncture would be as unsurprising as the fact that Apple will continue to exist even after the untimely departure of its cherished CEO.

Silver was off by 31 cents at the opening bell and it was quoted at $39.38 the ounce. The $36.96 level is still apparently the one to breach for the white metal to possibly commence an even more substantial decline than what has been experienced this week. Silver had "refused" to join gold’s rally up until almost the very last minute, and then, it too, attracted a sizeable crowd of latecomers who saw another chance for $50 (or more) to be achieved.

Platinum and palladium both opened unchanged (at $1,799 and at $745) this morning and the recent selling damage ($60 in platinum yesterday but only $13 in palladium) was less severe in this complex, albeit platinum is now trading some $100 under the recent peak it achieved. Palladium still appears as the most ‘stable’ one in this stable; its losses (and by some opinions) its potential downside risk are both on the small side.

Japanese investors meanwhile have been stepping up their purchases of physical but mostly ETF-based platinum since the noble metal has come to near-parity with the yellow one. Investment in platinum by Japanese buyers has doubled since July. Meanwhile, the same Japanese investor has been a consistent seller of gold into market strength in recent months (and even years)…

Spokesmen from Mitsubishi UFJ Trust noted that "While platinum prices are prone to downside risks as they are tied to industrial demand, the metal is more precious in nature than gold and its value is more stable. The fact our ETFs are growing may indicate more Japanese investors are shifting away from physical investment in precious metals.”

Reuters reports that the spread on the Tokyo Commodity Exchange (TOCOM) between gold and platinum, which is usually priced higher than gold (historically, an average of $200), narrowed this month and fell into negative territory for one day in early August.

While $215 of a cave-in in the yellow is surely quite painful to the multitudes seen still piling into bullion holdings in the initial hours of this trading week, the 12%+ correction is not yet eliciting any bullish towels being thrown into the market’s dirty laundry hamper. To the contrary, various forms of reality denial have been on display, complete with increasing decibel levels as to why gold must and will attain not just mid-four-digit, but also five-figure values… later. Not everyone agrees with that take, however, hefty recent gains notwithstanding.

Well, at least to time of day or a particular year were given as bait. To be fair, there were those who looked at this event and waxed somewhat ‘nostalgic’ as in: Dennis Gartman, for one. Dennis noted that:

"we exited one third of our gold position yesterday, and in retrospect we should have exited 150 percent of our long position. The biggest news of all, in our opinion, was that the capitalization of the" gold fund had surpassed the equity ETF."

"The motions that you are seeing are now indications of a market pop." More importantly, he also advised that "people should keep in mind that a reserve currency does not fluctuate as much as gold."

There was a lot of contending lately that gold was acting as a reserve currency and that it was poised to unseat the [insert your least favorite currency here].

See if you can identify where on this scale (below) that puts things at the present time… and where sentiment stood three days ago, aside from the mere fact that the gold market Daily Sentiment Index touched 98% on Monday (and the last two remaining bears were euthanized that night). 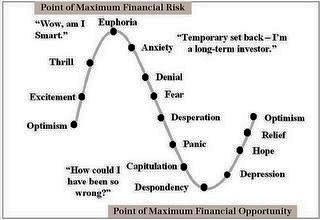 Overconfidence levels were also damaged as the CME hiked its gold futures trading margins by 27% (the second such adjustment in one month) on the heels of the SGE having done so in China. Adding to the anxiety-denial combination were conflicting expectations as to what the Fed’s Jackson Hole retreat might yield. Many –too many- are still expecting a full-bore "give" by the US central bank.QE-call-it-whatever-you-will-point-0 is being demanded by those whose party glass is near empty and they cannot leave the rave that has been oh-so-good to them for several years now.

Others see Mr. Bernanke as taking a wait-and-see attitude as he is cognizant of the heat coming from politicians as well as some of his own FOMC team members as regards the efficacy of more easing/bond/buying/etc. and the inflation risks they all carry. Expectations and speculative posturing surrounding the Wyoming Fed camping trip have become an annual ritual by now, but this time the emotions run higher than ever perhaps.

In a nutshell, says Jim Paulsen of Wells Capital Management,"We have created a very bad precedent. The financial markets whine and policy officials jump. The Fed has become the Pavlov’s dog of the stock market, and this is a horrible precedent for policy makers."

Some observers believe that Mr. Bernanke may take Mr. Paulsen’s criticism to heart and simply let markets (pick one) down for a change tomorrow when he fails to offer a concrete stimulus offering but only pledges to do so when/if it becomes necessary (pretty much the same language as the one used when the 2013 ‘extension’ of low rates was recently mentioned by the Fed but was grossly misinterpreted by certain markets).

There are some valid reasons for Mr. Bernanke to abstain from unconditionally pleasing certain market players with a further helping of asset purchases. For starters, the specter of deflation has shrunk to less scary proportions while inflation (ex energy and food) is now running but two-tenths of a percent under the Fed’s target of 2%.

Hold on tight; there is only one day left to wait for the "Wyoming Words."