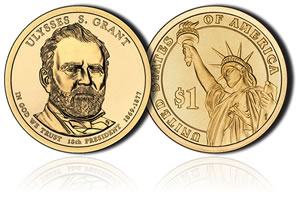 The amount of coins coming out of the United States Mint surged in May 2011, according to the latest coin production figures from the bureau.

The totals were the highest of the year, the second best over the past twelve months, and revealed the final mintages for the Ulysses S. Grant Presidential $1 which launched into circulation May 19.

The Mint pressed 807.41 million coins for circulation in May, topping the previous month by 26.1 percent and year ago levels by 22.9 percent.

The production gap grew wider last month between the two United States Mint facilities responsible for striking American circulating coins, which are the Philadelphia and Denver Mints. The lack of Philadelphia quarters was a deciding factor in the balance.

Both Kennedy half dollars and Native American $1 coins were silent for a second straight month. The United States Mint again focused its attention on smaller denominated coins. The combined Philadelphia and Denver Mint totals for the cent, the Jefferson nickel and the Roosevelt dime were easily the highest of the year. As always, Lincoln cents led the pack. They accounted for 55 percent of the entire coin output.

May 2011 US Mint Coin Production

As mentioned, the latest coin production figures reveal Ulysses S. Grant Presidential $1 mintages. Including the Grant dollar, there have been 18 Presidential $1 coins released since the series debuted in 2007. The Grant $1s rank fourth in terms of least produced. Their combined 76.02 million mintage falls behind the:

How the Grant $1 compares against past Presidential $1 coins may be seen in the table below.

Based on current coin production levels, the United States Mint had not yet started producing the next coin in the series, the Rutherford B. Hayes $1. That dollar is scheduled to launch into circulation on August 18.

Surprisingly, the latest figures from the Mint did not break out the preliminary mintages for the Olympic National Park Quarter. The quarter is set to enter circulation beginning on Tuesday, June 14. Extrapolating from the current data does provide an estimation. The Olympic quarter mintage is extremely close to 61 million. That total is arrived at by subtracting the known mintages of the already issued 2011 Gettysburg quarters (61.2 million) and 2011 Glacier quarters (61.6 million) from the current 2011 America the Beautiful Quarters® year-to-date production figure of 183.8 million.

CoinNews.net - January 20, 2022 0
Effective January 17, 2022, the Certified Collectibles Group (CCG), one of the largest private employers in the Sarasota-Manatee area, is instituting a $15 per...