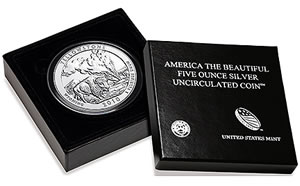 All orders abruptly stopped without the option of a waiting list for collectors who might have hoped an older order was cancelled. Wyoming’s Yellowstone silver coin went straight to the US Mint’s online "No Longer Available" page.

The sellout was expected. After all, the first coin in the series, the Hot Springs National Park 5 Oz Silver Uncirculated Coin, reached its maximum of 27,000 orders within two weeks, although the Mint did not officially call it sold out until they stopped the waiting list option at the end of the third week.

Yellowstone’s initial sales pace was robust, with 67% of the 27,000 sold during the first day. By the fourth day, a total of 91% were gone. It was just a matter of time for the final 9% to go. Finally, on the 16th day of availability, orders hit 100% and the United States Mint ended its sale. To the very end, the Mint enforced the one coin per household limit.

Since each buyer shelled out $279.95 for their purchase, the US Mint took in $7,558,650.00 in revenue. Not a bad draw, especially considering there will be 54 more coins in the America the Beautiful series — although the Mint also paid a pretty penny for the five ounces of silver within each.

Going forward, odds are against the same number of collectors being dedicated enough to pursue each of the coins for the next 10 years. If other recent coin series are an indication, interest tends to taper off as they age. Collectors do love silver coins, however, so much may depend on how future issues are priced.

The Mint’s June schedule includes another five ouncer for collectors. The next silver coin in the America the Beautiful coin series, launching one week from today on Thursday, June 9, will be California’s Yosemite National Park 5 Oz Silver Uncirculated Coin. It too will have 27,000 strikes, as the Mint already produced all five of the 2010 dated five ounce silver uncirculated coins with that limit. The other 2010-dated coins for release this year will honor Grand Canyon National Park in Arizona and Mount Hood National Forest in Oregon.

I don’t see a drop off in demand for these. The bullion coins have a much higher mintage and they are selling out. You can buy all 5 offered each year for less than the price of 1 oz proof gold. Eagles sell out each year with much higher mintages. I suspect they are going to increase future mintages
of these coins starting with 2011s.