The US Mint introduced three coin products last week, and the agency has provided the debuting sales figures for two of them in its latest weekly report. 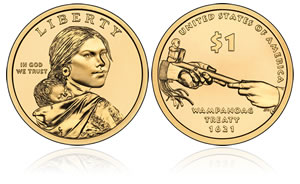 Andrew Johnson Dollar Covers were released Thursday. Collectors purchased 15,459 by Sunday. The level is a bit down from the inaugural sales of last years’ issues, as illustrated in the following table.

The US Mint also introduced the 2011 Quarters Silver Proof Set on Friday, April 1. Normally the Mint would have debut sales published for the sets by now, but it appears collectors will have to wait until next week for the results. Last year the sets debuted at 73,756 between their Thursday release and Sunday. But then the set was issued for a lower $32.95 price. This year’s sets, which contain 0.904 ounces of silver, launched at $41.95 and during a time when silver has reached new 31-year highs.

In a quick recap of weekly bullion US Mint sales, the one-ounce 22-karat American Gold Eagle was the only bullion coin to outperform its previous weekly increase (28,500 vs. 16,000). American Silver Eagles jumped the most, rising 658,500 during the prior seven days and topping 13 million in year-to-date sales.

The collector coin sales figures above have an "as of date" of April 3, 2011.